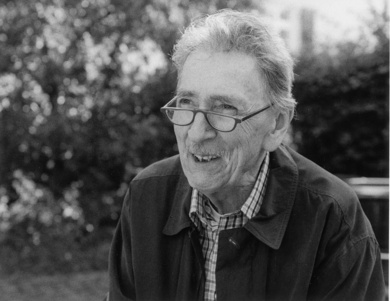 By students of the literature class, Oscar-Paret-School, Freiberg, 2013

Not being able to write openly, not being able to talk freely, because snitches of the secret service are lurking all around: From 1957 till 1968, the German-Romanian author Oskar Pastior (1927-2006) lived with the haunting fear to be arrested and to be sent to jail. Born in Hermannstadt (Transylvanien), he belonged to the German minority living in the area. After the Second World War, Pastior was deported to the labor camps in Russia. Later, he worked as a broadcasting reporter in Bucharest. In 1968, Oskar Pastior escaped through Vienna into the Federal Republic of Germany, where he lived in Berlin until his death. In the time-line, one can get an overview over his life.

How does one write while experiencing hardship, persecution and despotism? Oskar Pastior developed a language beyond all known patterns. with fractious strength, he broke through the sonic wall of monolingualism and created a whole, very own linguistic cosmos. His work is magic of language - artistically breathtaking.

Pastior never saw himself as being in exile. Nevertheless, the literature class of the Oscar-Paret-School in Freiber, which designed this exhibition, examines Oskar Pastior through the prism of exile. Many facts of his biography argument in favor of seeing him in this light; however, all participants of the exhibition are conscious of the fact, that this interpretation can be scrutinized, and that visitors of this show may develop their own verdict.