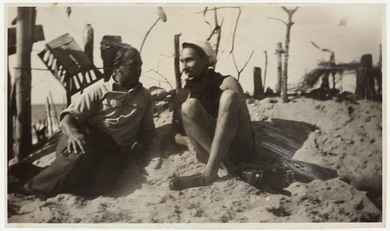 Ulrich Becher and George Grosz enjoyed a lifelong friendship. This also found expression in an extensive correspondence that gives insights into the two artists’ different experiences of exile.
Grosz and Becher had differing views of the political situation: “I’m staying in Europe,” Becher had written to George Grosz as late as September 1939, despite being fully aware of the drama unfolding on the political stage; by that time, Grosz, who had emigrated to New York in January 1933, had already been living in the USA for more than six years. Becher’s hope of being able to stay in Europe was to be in vain. While his time in exile was marked by numerous changes in location and hardly any opportunities for publication, Grosz enjoyed a comparatively successful career as an artist in the USA.

In their letters, Becher and Grosz discussed the many difficulties of living in exile, yet their correspondence also testifies to their humour and love of wordplay. In 1989, the letters were published in a collection titled Flaschenpost (Message in a Bottle).