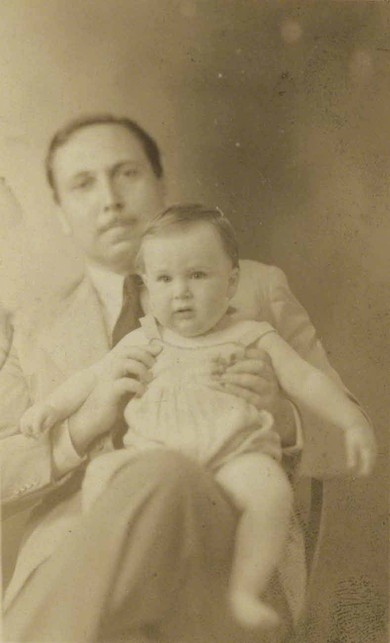 Thanks to the efforts of Becher’s parents-in-law, the Roda Rodas, and the intercession of Prince Hubertus zu Löwenstein and other friends such as George Grosz, Ulrich and Dana Becher finally received a visa for the USA in the summer of 1944. Roda Roda’s letter to Löwenstein, Becher’s passport, and a character reference intended to testify to Becher’s anti-Fascist views all document the steps taken in preparation for the Bechers’ exile in New York.

The Bechers arrived in New York on 2 July, and their son Martin was born on 21 October. While Dana and Martin lived close to Ulrich Becher’s parents-in-law in an apartment building on Westend Avenue, Becher himself lived in an attic in Yorkville, the German quarter. The city influenced the author’s work to no small degree: this was where he wrote Der Bockerer (Bockerer) and Feuerwasser (Firewater) as well as the New Yorker Novellen (New York Novellas) – all of them significant exposés of the experience of exile and the Nazi era. Becher also chose New York as the setting for later works (Das Profil (The Profile), Abseits vom Rodeo (Away from the Rodeo)). In an interview about his father, Martin Roda Becher talks about the literary fruit that grew from the period of “information gain”.