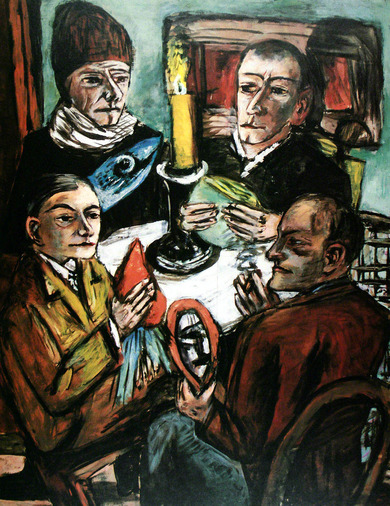 The ten years that the painter spent largely in Amsterdam were a distinct and important period in his personal life and his creative life. Immediately before that he had spent five years in Berlin. The Berlin years, in turn, were preceded by his years in Frankfurt from 1916 to 1932, which ended with the bitter experience of his ostracisation as a “degenerate” artist and the loss of his teaching post.

Even before the Nazis came to power, Max Beckmann was subject to attacks from that flank, and the attacks only worsened after 30 January 1933.

On 18 July 1937, Hitler opened the Große Deutsche Kunstausstellung [Great German Art Exhibition] in the just-finished Haus der Deutschen Kunst in Munich. Max Beckmann and his wife Quappi had emigrated one day before, as the artist noted and underlined several times in his painting list: “Amsterdam 1937 / as of 17 July”, and then later, presumably: “Emigré”.

On 4 August, Max Beckmann writes Stephan Lackner from Amsterdam that he would have a new studio available to him beginning the next day and says, “I want to stay here for the time being, perhaps later Paris. But for now Amsterdam is not bad.” On 26 April 1939, the painter tells Lackner with relief that he has received his carte d’ identité for France and notifies Valentin a few days later that his final move to Paris was planned for 1 August. Paris plans notwithstanding, he writes to I.B. Neumann on 1 May, “I am very interested pour l'Amerique and will probably wind up there in the end.” When the War broke out on 1 September, he was trapped in Holland.

The Beckmanns succeeded in having all of their furniture and pictures promptly shipped to Amsterdam. Thus the painter was able to finish previously started works and modify others. In Paris another group of paintings emerged, as in the ten years in Amsterdam.

Thanks to the artist's diary, his letters and reports by contemporaries, we know quite a lot about these years. Beckmann was astonishingly prolific and created very many important works in Amsterdam in spite of the increasingly difficult living conditions following the outbreak of the War on 1 September 1939 and the occupation of the Netherlands by German troops on 10 May 1940.

His productivity is manifest not least through the preserved works from the time. Images of resistance in the simplest sense are few and far between. Max Beckmann had come to a world view in which, notwithstanding his love for humanity, nature and the simple things, the metaphysical realm was of the greatest importance. Is there life after death? Does reincarnation take place in the great ages of time?  Who are the gods and daemons who play with our fates? How can I become a Self?

Despite his philosophical and religious interests, Max Beckmann was anything but detached from the world; indeed, he took note of the goings-on of the War both near and far; the small and large indignities of everyday life; strikes by the Amsterdam workers; visits by his few friends and acquaintances; eating and drinking, not least in the bars; walks and moods that swung between an indomitable will to live and deep depression. Political questions go all but unmentioned in his diary; if at all, they appear in general terms, encrypted or as keywords.  This was perhaps not only, but certainly also a precautionary measure after the German occupation of Holland. On the occasion, Beckmann had burnt his previous diaries.

He also repeatedly reflects on his own situation: “Today I wanted to die of weakness and melancholy again.” (31 March 1943), “Very worried and nerveux for 1944. Life is dark – as is death. Close 1943.” (31 December 1943) And yet: “Even our own cadaver-bones shall not hinder us from standing our ground until the very last, proud and tired in the face of the black wall that surrounds us.” (10 October 1943)

At last came the day of liberation and with it the end of the War for Max and Quappi Beckmann: “At 10 o'clock a Dutch girl came by Lütjens: ! PEACE!“, records the diary entry on 4 May 1945, but on 5 May we find: “Well -  not quite yet  - green police [the Germans] still driving around with machine guns, etc. Nevertheless big peace party with warning by Eisenhower.  -  Walked around in the city, much drunkenness.” And the ever-present daily cares (“Coal, coal, coal!!! Everything down to the scarcity of coal.” (21 May) now combined with worries about getting the requisite Dutch papers and not being classified as a hostile foreigner and returned to Germany. The papers were not issued until August 1946. In early 1947 a foreign trip was once again possible, to Nice via Paris; and on 29 August Beckmann was off to New York before continuing on to St. Louis, where a teaching position awaited him.

Looking at the years of Max Beckmann's Dutch exile, it can indubitably be regarded as a distinct period. It was in Beckmann's life a period of increasing adversity – from the Nazis' defamation as a “degenerate” artist to emigration, the outbreak of the War, denial of a visa for America, the occupation of Holland, the threat of being conscripted into military service, the slackening sales and thwarted exhibitions on down to the difficulties of living in an occupied country as a national of the occupying force and not receiving papers at the end of the War. These hardships, combined with age and illness, led the painter into deep depressions. But he found solace in the face of his fears and doubts again and again in a thought which, in different forms, manifests itself in his work as well: “If you look at all of this – the whole War or even one's whole life as just a scene in the theatre of the ›eternal‹, many things are easier to bear –” (12 September 1940)

Above all, art helped him through it. In spite of myriad difficulties, a rich trove of work emerged in Amsterdam.