I am healthy and have become young again …

At the beginning of the Second World War, the some 70,000 German nationals living in Britain were officially registered. However, it was only in May 1940, when German troops marched into France and the Netherlands and threatened to invade Britain, that the mass internment began of "enemy aliens" formerly classified as harmless.

Ludwig Meidner was initially interned from June to October 1940 in the Huyton Alien Internment Camp near Liverpool, where a recently built council housing estate surrounded by a barbed wire fence was used to house internees. Freed of his immediate concerns about how to make a living and invigorated by his encounters with the many other interned artists and intellectuals, Meidner flourished: "I am healthy and have become young again, look as if I am in my early forties and draw portraits all day, including commissions, as well as landscapes when the weather is good, for there is also nature to be found in this architecturally well-designed camp, which is a modern workers’ estate and will in the future resume this function again." (letter from Ludwig Meidner to Hilde and Walter Rosenbaum dated September 24, 1940, Institut Mathildenhöhe, Städtische Kunstsammlung Darmstadt, at Stadtarchiv Darmstadt, ST 45 Meidner 1176) 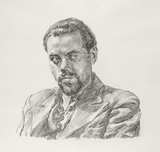 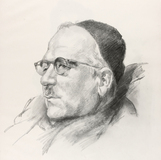