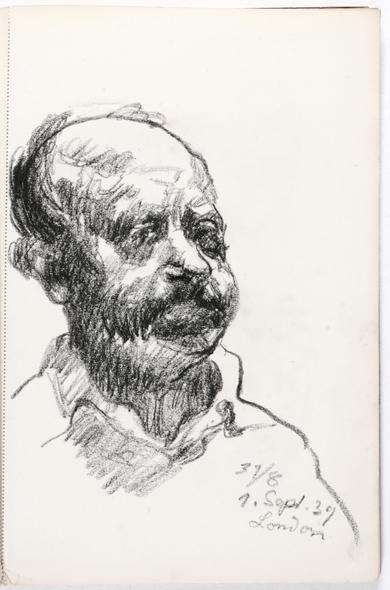 … in this ocean of stone in which everything, but everything is business ...

Ludwig Meidner arrived in London at the beginning of August 1939. There followed 14 years of exile and serious financial hardship, during which Meidner tried but failed to find a way into the English art scene. His social contacts were for the most part limited to other German-Jewish emigrants. His involvement with the Free German League of Culture and with a project aiming to establish a Jewish artists' group associated with London's Ben Uri Gallery remained short-lived episodes.

During his period of exile, Meidner's artistic output was dominated by drawing, which he combined with watercolors in lieu of painting in the oils he so sorely missed. This situation was rather typical for emigrant artists, who often lacked the financial means to acquire the materials needed for oil painting – canvasses and oil paints were far more expensive than paper, pencils and a box of watercolors. In spite of the depressing poverty and lack of recognition as an artist characterizing Meidner's time in London, these years in fact proved highly productive for him in artistic terms. He took extensive walks through the city, tirelessly recording his impressions in his sketchbooks. While interned as an enemy alien, he portrayed hundreds of his fellow internees. He also produced extensive watercolor cycles featuring humorous and grotesque depictions, in which Meidner commented on a time out of joint. While in England he also drew a cycle focusing on the persecution of Europe's Jews, which he observed from afar with increasing horror.