Ludwig Meidner - In Germany after 1933 Ludwig Meidner - In Germany after 1933

The course of world history also made me a witness to the demolition of our synagogues to the jubilation of the Cologne population. The ground under my feet burned unbearably, yet for months I simply had to endure.

Ludwig Meidner, In Reference to Myself (Hinweis auf mich selbst), 1944 [?]

As a recognized Jewish artist, Meidner faced an increasingly precarious situation after the Nationalist Socialists came to power. His possibilities of earning a living as a visual artist or as a writer became increasingly limited. In 1935 Meidner took a job as a drawing teacher at a Jewish school in Cologne. This decision not only provided him with a regular income but also enabled him to escape the anti-Semitic pressures he faced in Berlin. Although Meidner had been making different plans to emigrate since 1933, it was only in 1939 that he and his family left Germany for England, after the "Kristallnacht" pogroms in November made the situation for Jews in Germany unbearable.

Life under National Socialism is reflected in a series of bleak charcoal drawings by Meidner that he titled "Visions". These complex, enigmatic depictions, which are difficult to interpret, convey the sense of a diffuse threat. In addition, Meidner also painted groups of figures that recall his scenes of catastrophe from the 1910s and can be interpreted as commentaries on the exclusion and discrimination of Jews under National Socialism. These groups are composed of people encamped without shelter under the open sky: beggars, the dispossessed, the homeless. 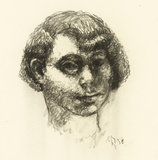