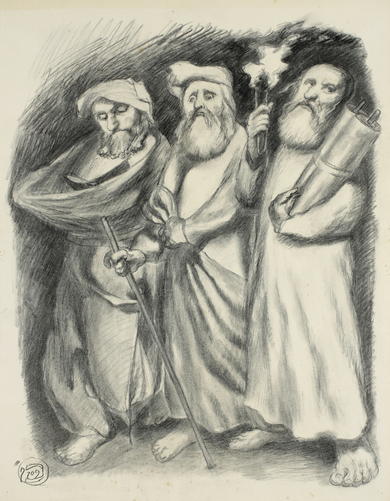 My religious development, which has been enormously important in my life, and which, on the one hand, fed my art as a source of ecstatic experience and religious themes, but, on the other, as already described, later crippled me and at times resulted in my complete absorption in religious issues – can only be roughly sketched here.

During the First World War Ludwig Meidner embarked on an intensive exploration of religious ideas. In the face of the crisis of civilization represented by the war, he came to regard the utopian impulse of Expressionism as obsolete and turned to the study of religious texts. In the 1920s religion took on a progressively more central role in his creative output. Well into old age he continued to draw idealized portraits of devout Jews and scenes from Holy Scripture. Meidner himself summed up his religious development as follows:

"Until my 29th year an atheist – from then on immersion in a wholly religious-mythic yet individualistic form of experience. From the last year of the war onwards wholly devoted to Christian-mystical thought and experience. 1919 to 1923 focused on Christian theology, namely that of the Apostle Paul. Then, following years of tumult, a reversal. Return to Judaism, acquaintance with Hasidism, adoption of Jewish religious practice from 1924; from 1927, the year of my marriage, precise Jewish ritual observance in accordance with the Schulchan Aruch became decisive. I felt a great tranquility; my struggles were over." (letter from Ludwig Meidner to Franz Landsberger from 21.02.1934, Institut Mathildenhöhe, kept at Stadtarchiv Darmstadt, ST 45 Meidner Nr. 669) 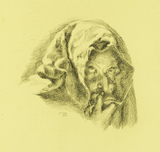