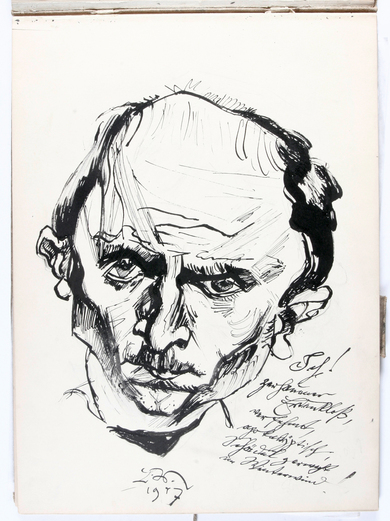 I, battered lump of clay, ostracized, apocalyptic, my skull swept by the winter wind

Inscription on the self-portrait from 1917

Ludwig Meidner is now known throughout the world as an expressionist. Based in particular on his "Apocalyptic Landscapes" and his depictions of the metropolis, he is regarded as an important representative of urban Expressionism. However, Meidner was also a significant portraitist, who produced psychologically dense portraits of the protagonists of Berlin's literary and artistic milieu.

Meidner's expressionist works are characterized by often spontaneous, dynamic gestures, which are indicative of a creative process that frequently bordered on ecstatic and could almost be described as a creative frenzy. For this reason his contemporaries regarded him as the epitome of the expressionist artist:

"While the label 'Expressionism' repeatedly seems inadequate and unfounded because, on the one hand, it signifies nothing more than what has always been a criterion of art, and, on the other, it is too narrow and says nothing about, for example, Marc, Lehmbruck, Kokoschka and Klee – i.e., it is unsuitable as an umbrella term for modernism – there is nevertheless one figure among the prominent artists of our day that the very phonetic dynamism of the word compels us to call an ‘expressionist’: Ludwig Meidner. Everything he does is expression, outburst and explosion." (Willi Wolfradt, Ludwig Meidner, in: Das Junge Deutschland, January 1920)