My job is to chatter away in winter and to spend the summer looking at what I’m going to chatter about for the people who are to be chattered to. ... It – very naturally – goes deeply against the grain, not to do the little I can do and am allowed to do because it's too dangerous.

From 1937, Erika Mann gave up to 70 lectures every year in the winter months. She spent the summers in Europe: with the International Brigades during the Spanish Civil War (1938), in annexed Czechoslovakia (1939), in London while it was being bombarded by the German Luftwaffe (1940), and from 1943 as a female war correspondent for the 9th U.S. Army in Persia, Egypt and Palestine. In June 1944, she travelled to France, Belgium, Holland and Germany wearing American uniform. She talked about her experiences on the radio, worked for the BBC’s German Service, wrote articles for American newspapers and magazines. In doing so, she often expressed controversial political views, advocating for example a consistent re-education of the German people following the defeat of Hitler, and was appalled by the German emigrants who wished to make suggestions to the Allied victors regarding the order to be established after the war. The secret services paid close attention to her opinions and activities: the Gestapo had her under surveillance until 1941, while her FBI file covered the period up to 1954. 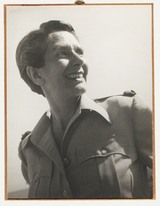