I think, she will be a success. I think, she will be a success.

In Cleveland, I spoke 5 times in three days, which [...] brought me to the verge of collapse. […] Otherwise, though, the stay was something of a triumph, and my successes as public speaker number 1 are mounting.

After just three performances in New York in January 1937, the fate of the “Pepper Mill” was sealed. Erika Mann quickly found a new platform: as a political speaker and travelling lecturer. Her very first appearance was spectacular: she spoke to 23,000 people at a “peace & democracy rally” in New York's Madison Square Garden. She was joined on stage by the Mayor of New York LaGuardia, the trade union leader John H. Lewis and a former aide of President Roosevelt. It became a great demonstration against the threat of war emanating from Hitler and a call for an economic boycott of Germany. Erika Mann’s speech made an impression. That same year, she was placed under contract by an agency for travelling lecturers. Over the years that followed, she spent the winter months travelling all over America. She lectured audiences large and small on “The Education of Young People in the Third Reich”, on German dictatorship and the dangers of fascism. She felt that America was her new home and the Pullman coach her “Fatherland”. 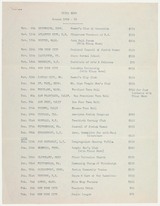