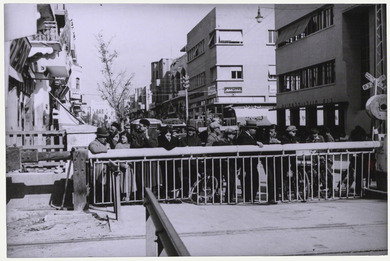 [There is hardly any country in the world where German writers did not end up. From France to the Soviet Union, from Switzerland to China, from Finland to South Africa, from Brazil to Iceland, scattered across the globe, they tried everywhere to spread their works and ideas. (ed. trans.)].

Wieland Herzfelde in a lecture, 1949

Artists often have to leave their homeland because those in power consider them to be dangerous or because they belong to a persecuted group. But where can they go to when it is no longer safe for them in their own country? As far away as possible, so that they can work from a safe distance? Or to a neighbouring state, so that they do not lose touch with their colleagues, their public or their professional networks? What impact does such a move have on their artistic work?

Most of the artists who emigrated immediately after the Nazis seized power in 1933 were political opponents of those in power and decided to go into exile in neighbouring countries in Europe. They wanted to wait and see what happened in Germany and fight against the Nazi regime from abroad. Czechoslovakia and France in particular still offered those in exile comparatively good refugee conditions until 1938 and 1940 respectively – until the aggressive German expansion and the War caught up with those who had fled. In Austrian-Hungarian-influenced Czechoslovakia, writers and playwrights could play to a German-speaking public. About a fifth of German emigrants fled via France with many artists among them. In Paris and Prague they were able to meet up with colleagues and they established their own meeting places and organized joint initiatives there. However, many were unable to work and lived under difficult circumstances, often in dire financial straits.

The expansion of the Nazi sphere of influence, the increasingly severe persecution and the outbreak of World War Two made Europe more dangerous for those in exile and increased their risk of falling into the hands of the Nazis. In July 1938, an international conference to discuss the refugee problem took place in the French town of Evian at the suggestion of the US government. The conference, however, had hardly any impact at all. The countries involved did not see themselves in a position to offer the refugees asylum. Many managed to get overseas, in particular to the USA and South America, despite the restrictive entry requirements. Important receiving countries were also Palestine and Britain and it was still possible to travel to Shanghai without a visa until the end of 1941. Many countries saw the establishment of exile centres which made things easier for political and artistic groups, although cafés, clubs, theatres and coordinated aid activities also helped those in exile to gain a foothold in their new life.

Like today, where artists could flee to and live in exile depended on many factors. Would they be issued entry permits? What possibilities existed to even get to the country of exile? It was often down to pure chance that artists landed in a particular exile country. The situation changed after World War Two, and Germany became a country of asylum itself. Many persecuted artists from abroad sought protection in the Federal Republic and in the German Democratic Republic. Organisations like P.E.N. (poets, essayists, novelists) still support artists today by offering them scholarships in democratic and therefore safe countries. A special case among exile movements were artists who left the GDR: many of these found the same language, a similar cultural environment and in many cases an interested public in the Federal Republic.