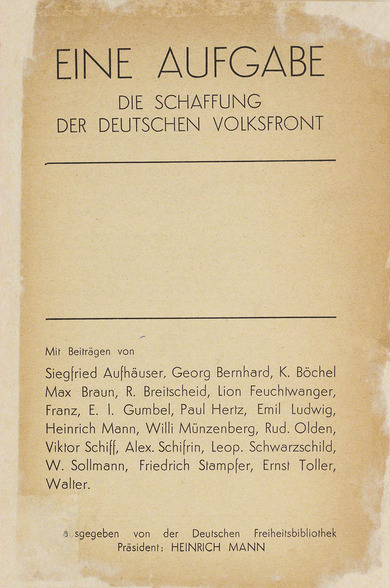 [The Germans, the ones gathered outside, have taken on the task of uniting the opposition powers to make them capable of united action. (ed. trans.)]

From 1932 until the beginning of the Second World War, the "Volksfront" was a coalition which united the opponents of the Nazis. In the 1932 Reich presidential campaign it included parties from the monarchists to the SPD and, in the referendum in the Saar region in January 1935, the Social Democratic Party of Saarland, the Communist Party, small left wing parties and factions of the German Centre Party.

From the early summer of 1935 exiles in Paris, mainly representatives of non-partisan organisations such as the Association of German Writers began to discuss the creation of a united front amongst the entire émigré community as well as making it their task to publish the opinions and statements of figures from the political and cultural emigration in the Deutsche Freiheitsbibliothek (the German Freedom Library). Momentum was provided by the first International Writers' Congress for the Defense of Culture in Paris; the union of the bourgeois Radical Party with the French Socialist and Communist parties under the banner of the "Front populaire antifasciste"; the 7th World Congress of the Comintern in Moscow, which propagated the strategy of a worldwide "People's Front". The conference of the "German opposition" on 2 February, 1936 in Paris was again dominated by ideological factions and the committee tasked with preparing a German popular front was comprised of three social democrats and communists each, two representatives of the Socialist Workers Party, the "Catholics" and the "liberal bourgeoisie". Its non-partisan president was the writer Heinrich Mann.

The conference launched the resistance of émigrés and a united foreign offensive against the Nazi regime. The programmatic statements of the Committee for the German People from 2 February and 21 December, 1936 (signed amongst others by Arnold Zweig, Ernst Toller, Rudolf Olden, Egon Erwin Kisch, Rudolf Leonhard, Johannes R. Becher and Klaus Mann) as well as those from 10 April, 1937, were based on human and civil rights. Internal tensions following the war in Spain and policy changes in Moscow which had resulted in the hunt for "Trotskyists" and subsequent show trials were ultimately to paralyse the Popular Front Committee. Attempts at mediation (by Lion Feuchtwanger among others) failed, including an attempt to restructure the committee led by Thomas Mann. The "Stalin-Hitler" pact then put an end to all of the committee’s efforts of the 1930s.

During the course of the war the idea of the Popular Front was revived by the Allies. After networking operations in the United States following the establishment of the National Committee for a Free Germany in Moscow in July 1943, the Council for a Democratic Germany was formed at the beginning of May 1944 in New York with a public declaration signed by politicians, scientists and some twenty artists. The policies and programmes adopted in the post-war political landscape of Germany would be beholden to a western understanding of democracy. Bertolt Brecht, Elisabeth Hauptmann, Berthold Viertel, Walther Victor, Günther Anders, Friderike M. Zweig, Alexander Granach, Oskar Homolka, Erwin Piscator and Max Liebl were particularly active in initiating and participating in these committees.