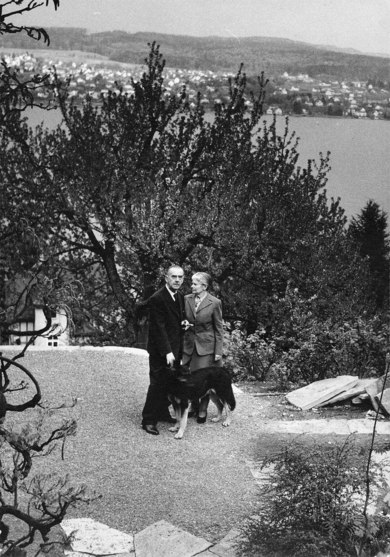 Thomas and Katia Mann with their dog Boris in their garden above Zurich Lake, Kilchberg 1955
© Keystone / Thomas-Mann-Archiv Zürich

[If you are in command of a heavily occupied, small lifeboat with a limited capacity and equally restricted supplies while thousands of victims of a maritime disaster are crying for help, it will appear harsh if you cannot take all of them on board. However, he remains humane by giving timely warnings against hoping against hope and at least attempting to save those he has already taken on board. (ed. trans)]

Its immediate proximity to Germany, its long tradition of neutrality and its common language made Switzerland the most popular destination of those going into exile after the Nazis had seized power. As a result of several ordinances issued in March/April 1933, the numerous refugees seeking to enter Switzerland were subject to far-reaching restrictions. Fear of being overrun by foreigners and economic concerns nourished a national identity of Switzerland as a transit land with a wide range of residency conditions and a strict work prohibition. Political asylum was only granted in a few cases. As persecution on the grounds of ethnic origin was precluded from these grounds, Jewish refugees were denied recognition as political asylum-seekers. They were designated as “emigrants” in contrast to the politically persecuted “refugees”. This ruling was only revoked by the Swiss Federal Council in July 1944.

Among other issues, the rising number of refugees after the annexation of Austria led to a discussion in Switzerland in the summer of 1938 about introducing a general visa obligation. However, to spare tourists the bureaucracy that this would entail, an agreement was reached with German authorities that the passports of German and Austrian Jews would be stamped with a “J”. It was then no longer legally possible for Jews to enter Switzerland. As a result of the massive increase in refugees after the start of deportations from Western Europe, the borders were closed completely in 1942. During the Second World War around 300,000 foreigners seeking protection lived in Switzerland.

In spite of the difficult living conditions, from 1933 the Swiss federation became a refuge for many German writers such as Thomas Mann, Robert Musil and Else Lasker-Schüler, children’s book authors Lisa Tetzner and Kurt Kläber and the illustrator Clément Moreau. Swiss theatre between 1933 and 1945 was heavily influenced by emigrants. The Zurich Spielhaus took on a prominent role in this regard as did – to a lesser extent – the Stadttheater in Basel and the Pfeffermühle cabaret under the directorship of Erika Mann. Emil Oprecht's Europa publishing house in Zurich established itself as an important platform for anti-Nazi exile literature. In 1933, the publisher Bruno Dressler founded Schweizerische Büchergilde Gutenberg [Swiss Gutenberg Book Guild], after its German counterpart had fallen victim to the Nazi “Gleichschaltung” (being brought into line with Nazi doctrine). The biographical report Die Moorsoldaten [The Peat Bog Soldiers] was published in 1935. In this book, the actor Wolfgang Langhoff describes the reality of German concentration camps. It was reprinted nine times within one year of its publication. Other published works of exiles, such as the correspondence between Thomas Mann and the University of Bonn, were also published by Oprecht with notable success.