First International Congress of Writers for the Defence of Culture, Paris 1935 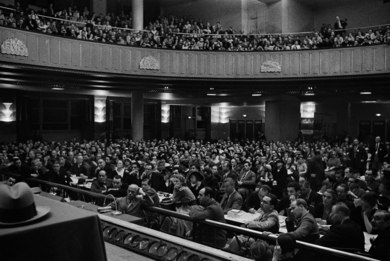 The opening event of the Congress of Writers in the Parisian Mutualité on the evening of 21 June 1935
© Gisèle Freund, Sammlung Dr. Marita Ruiter / IMEC, Fonds MCC, Vertrieb bpk

First International Congress of Writers for the Defence of Culture, Paris 1935

[In view of the dangers facing culture in many countries, several writers had seized the initiative to organise a congress with the aim of discussing and assessing the means by which we can defend culture. (ed. trans.)]

From the appeal to hold a congress (Aufruf zum Kongreß), 1935

In face of the threat posed by the Nazis, the Congress of Writers “for the defence of culture” took place in Paris in 1935 for the first time. Artists from all over the world responded to the appeal issued by a number of French authors and more than 250 participants from 38 countries attended the discussions that took place between 21 and 25 June every afternoon and evening. Despite the high admission prices, the main hall of the Maison de la Mutualité was packed full at the opening event. The 3,000 members of the audience included numerous refugees from Germany and Austria. Loudspeakers were set up in front of the building for those who had been unable to get hold of tickets so that the speeches could be heard outside as well.

The agenda dealt with subjects like “cultural heritage”, “nation and culture” and “the role of the author in society”. The contributions of many well-known German émigrés, among these, Anna Seghers, Heinrich and Klaus Mann, Robert Musil, Bertolt Brecht and Lion Feuchtwanger, had a considerable impact on the Congress.

A number of the initiators hoped that the Congress would lead to the establishment of a “people’s front of writers” that would campaign against fascism. However, the Congress exerted no political influence at all as the positions of those who attended it were far too diverse. Nevertheless, it was seen by many as a success as it had given space to a voice of protest, those who attended gave each moral support and networks were established. In the three years following, further congresses were held in London, Valencia and, in 1938, once again in Paris.

The photograph of the opening event was taken by Berlin photographer Gisèle Freund, who had emigrated to France in 1933. Following an invitation by writer and co-organiser André Malraux, she documented the five-day Congress making a number of portraits of well-known participants in the process.