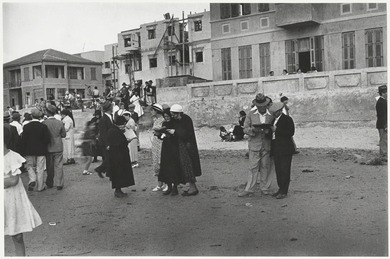 [On the streets of Tel Aviv, you can hear where the Jews are hardest hit (…). Now you can hear German. Before that you could hear Polish, for a time Hungarian, for a time Romanian, and around 1920 Russian (ed. trans.)]

In the 1st century A.D., the Romans destroyed the Jewish Temple in Jerusalem, and most of the Jews left the Palestine region and went into exile. Ever since, the return to "Eretz Israel" has played an important role in the Jewish religion and culture. For example, the blessing prayed for on the feast of the Passover: “This year here, next year in the Land of Israel.”

In the 19th century, various Jewish publicists rekindled this desire and called for a Jewish state in Palestine. The Zionists saw no opportunities in Europe for Jews to ever become fully-fledged citizens. At this time, there were already emigration movements from Europe to Palestine.

After the Nazis came to power, around 60,000 German Jews had left for Palestine by 1941. Between 1932 and 1948, around 265,000 people came to the region, which was under British administration. Often only illegal immigration was possible, as the British authorities strictly regulated the influx. However, many immigrants were motivated by the prospect of building a new country, including German-born architect Chanan Frenkel.

Many German Jews in particular found it hard to settle in Palestine. Some of them were not staunch Zionists and rather saw themselves as German. In Germany, most of them had adapted to the majority of society and had not learned Hebrew. As the Jews in Palestine wrote and spoke almost exclusively in Hebrew/Ivrit and rejected German as the language of the offender, it was especially difficult for academics and artists to settle in Palestine, as in the case of writers Leo Perutz and Arnold Zweig. German emigrants, and especially academics and artists who were not fit to be farmers, were often derisively referred to as “Jeckes” on account of their formal-seeming behaviour.

After the murder of the European Jews, Palestine became one of the main immigration countries for Jews coming from Europe. With the foundation of the State of Israel in 1948, the country increasingly became the country of destination for survivors of the Holocaust.