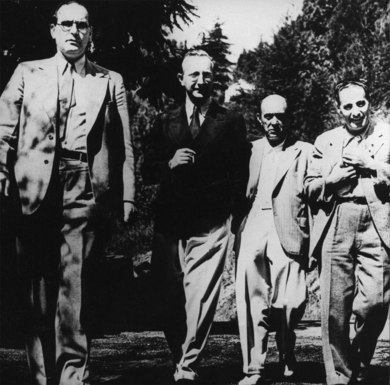 [but all of that is situated behind a pane of glass, and I find myself automatically looking for a small price label on every range of hills or on every lemon tree. I also look for these price labels on the people here. (ed. trans.)]

After New York, the Californian town of Pacific Palisades became one of the most important locations for artists who emigrated to the USA. Many of them who had already gathered in exile at the French town Sanary-sur-Mer met in California again, among them Bertolt Brecht, Lion Feuchtwanger and Franz Werfel.

Some of the artists sought proximity to Hollywood and hoped for a career in the film business. However, this often turned out to be difficult: artists such as Brecht did not appeal to the tastes of the American film industry, neither did they want to. Whilst a few exceptional artists such as Thomas Mann made a good living in Pacific Palisades others had to work as gardeners or dishwashers.

After the USA entered the War in 1941, the emigrants were regarded as “enemy aliens” and confined to their homes from eight o’clock in the evening until six o’clock in the morning meaning they were no longer able to use public restaurants as places to exchange information.

This inevitably led to the development of a culture of private invitations. Many emigrants never really got accustomed to the way of life in California. The long walks taken every day by many emigrants, among them Thomas Mann, astonished the Americans who preferred their cars. Old neighbourhood connections from Germany were revived. Bruno Walter, the conductor, once again lived side by side with the writer Bruno Frank in California. However, not only old friendships, but also old conflicts were revived again, for example, Brecht and Thomas Mann.