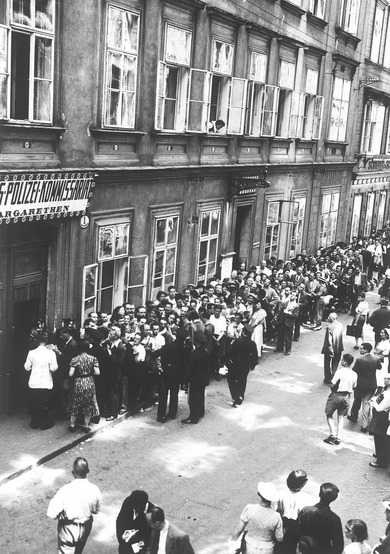 Jews standing in line for passports at a police department in Vienna in May 1938
Österreichische Nationalbibliothek, photographer: Albert Hilscher

On April, 30, 1933, my wife and I crossed the border from Germany into Austria near Kufstein in the Tirol. It was no romantic escape over hidden trails, but an uneventful drive on the main road in a broad-hipped American car. The German and Austrian frontier formalities were no stricter as usual, an the whole procedure took only a few minutes. [...] I was not in exile. We were leaving Germany only for while, until the end of the present terror. Then we would return, perhaps in eight weeks.

In the first weeks after the Nazis came to power, many of the politically persecuted left Germany for neighbouring Austria in the way described by Loewenstein. Many refugees wanted to watch for developments in Germany from geographically proximate Austria for the time being. By choosing Austria as their place of residence, the German refugees also expected to be able to settle in more easily: many had Austrian acquaintances or relatives. There was also no language barrier. Even though Austria also had a dictatorial government from March 1933 under Engelbert Dollfuss, who also aspired to an Austro-fascist corporative state, many intellectuals, artists and politically persecuted moved to this country. The entry conditions were relaxed, although the “Schubgesetz”, or deportation law, could be used to prevent undesirable foreigners from entering the country and deport foreigners who were already there.

The Jewish Community alone looked after around 4,600 people who came to Austria between 1932 and 1936.  Precisely how many people came from Germany to Austria cannot be determined. Initially, many native Austrians returned home, including Oskar Homolka, Max Reinhardt and Leonard Steckel. Some of those politically persecuted in Germany, such as Walter Mehring, Wieland Herzfelde and Carl Zuckmayer, also fled to Austria.

However, the lack of a language barrier was no guarantee of artistic working opportunities, and emigrants from Germany often met with political misgivings. Anti-Semitism and extreme conservatism drove other exiles to look for work opportunities in another exile country.

After the annexation of Austria on 12 February 1938, which put the country under the control of the Nazis, a major campaign of persecution started there as well, its victims including opponents of Nazism as well as members of the Jewish population. Many people who had previously sought refuge in Austria were forced to find safety in another country.