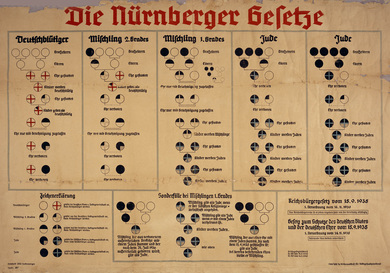 [Society wanted me to be a Jew, I was supposed to accept the verdict; any retreat into subjectivity, which might perhaps have allowed me to say that I didn’t “feel” like a Jew, would have been an irrelevant, private game. (ed. trans.)]

Discrimination and persecution of the Jewish population was anchored at the state level in the first years of the dictatorship: by law Jews were reduced to second-class citizens and, step by step, ostracised from all areas of public life.

The basis for all the later legal provisions which led to the removal of rights, the confiscation of property and finally to murder, was formed by the so-called Nuremberg Laws, which were passed by the Nazi Party at the Nuremberg Rally on 15 September 1935. The “Law for the Protection of German Blood and German Honour” forbade both marriage and extramarital relations between Jews and non-Jews, while the “Reich Citizenship Law” introduced a distinction between “Reich citizens” and “nationals”. Only “Reich citizens” were accorded the full range of civil rights, such as the right to vote and hold public office, rights which were denied to “nationals”. However only those who were of “German or related blood” could be “Reich citizens”.

The significance that individuals attached to their heritage or religious affiliation was irrelevant; those affected were now defined by law as Jews or “half-breeds” in the first or second degree.

The first wave of Jewish emigration from Germany began as early as 1933, when the Nazis assumed power. The Nuremberg Laws, with their regulations and provisions for implementation prompted a second wave; numerous bans on professional life and intrusions into the personal realm rendered a self-determined existence in Germany impossible. The third, and largest, wave of emigration followed the violent riots in November 1938.

As a result of the Nuremberg Laws, expressions such as “full Jew” and “half Jew” established themselves in legal commentary as well as everyday speech, and their effect is still felt in contemporary usage.