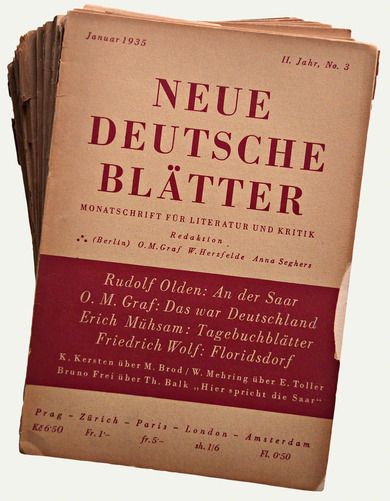 [Brothers, in your hands
you hold Germany’s fate.
You can change its course!
You can end it!
One day you will fulfil your great destiny (ed. trans.)]

Wieland Herzfeld, the founder of the publishing house Malik-Verlag, not only published books in exile in Prague, he was also the editor of the exile journal Neue Deutsche Blätter, which was published from 1933 onwards by the newly founded Faut-Verlag. Since as a foreigner, however, he was not permitted to found himself a publishing house in Prague, acquaintances of F.C. Weiskopf gave their names on paper as editors. The stated aim of the journal was to fight Nazism using words as its means. The members of the editorial team, who worked locally from their respective countries of exile, were Anna Seghers (working from Paris), Oskar Maria Graf (Vienna), Wieland Herzfeld (Prague) and Jan Petersen (Berlin). The latter frequently smuggled information out of Germany for the journal section Stimme aus Deutschland (Voice from Germany) on current domestic events. He signed his texts with three stars (***) in order to remain anonymous.

The journal had published 18 issues by 1935. Nearly all exiled German writers had had something published in the journal by this point. For many of these writers, the journal was an opportunity to publish samples of new work for the first time and to expose them to discussion. Excerpts from major works such as Die Prüfung by Willi Bredel and Dreigroschenroman by Bertolt Brecht were published. The Neue Deutsche Blätter achieved print runs of up to 7,000 copies at its height, before the rise of the Nazis increasingly solidified their grip on power and the sales market started to decline. Herzfelde was forced to stop production in 1935 for financial reasons.