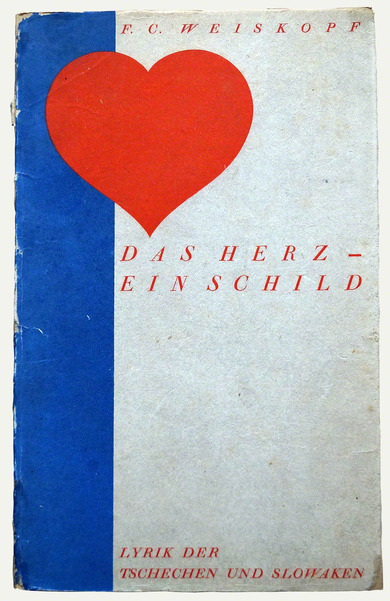 [If I wasn’t Peter Panter, I would like to be a book cover published by Malik-Verlag.  (ed. trans.)]

Peter Panter [alias Kurt Tucholsky], in a review of Weltfabrik by Ilja Ehrenburg, 1932

The publishing house Malik-Verlag was one of the most important publishers of left-wing as well as avant-garde literature and art in the Weimar Republic. Set up in 1917 as a newspaper publisher, it developed in the 1920s to become a publisher of books. It was run by Wieland Herzfelde who achieved success with the publishing house together with his brother John Heartfield. He and George Grosz were responsible for the book illustrations, which lent the works their unique appearance.

1933 saw the names of the two brothers, their works and publications on the Nazis’ black list. With the Gestapo after them they fled to Prague. Herzfelde, supported by wealthy sponsors, immediately took up the publishing business again there. He published 40 works, some of them with several volumes, as well as the newspaper Neue Deutsche Blätter. When the Germans occupied Czechoslovakia, the brothers were forced to flee once again and Malik-Verlag ceased to exist.

Herzfelde worked without pay in publishing during his American exile from 1944 to 1947 when he and others set up the exile Aurora-Verlag in New York, which published the works of Anna Seghers among others. He earned his living running a small shop selling books and stamps.

And who or what is Malik? It is a story by Else Lasker-Schüler, excerpts of which were published by Herzfelde in 1917 and which was published in its entirety at a later date by Paul Cassirer Verlag. This is where the publishing house got its name from.