[The sports stadium was packed full with people who were lying around on benches, sitting or standing. There was a football pitch in the middle, with well-tended turf that nobody was allowed to walk on. […] Open buckets were provided as makeshift toilets and they were overflowing. The area around the playing field was a promenade of desperation. (ed. trans.)]

The dancer and choreographer Jean Weidt in his memoirs Der Rote Tänzer, 1968

At the beginning of the Second World War many countries interned so-called “enemy aliens”. This meant that all Germans living in a country were arrested. In countries like Belgium, France and England fear of the so-called “fifth column” spread, and people suspected all Germans (and to some extent Austrians, Czechs and people from other nations) from being involved in it. They were supposedly spies who would support the German Wehrmacht “from the inside out” when it came to occupying that country.

Internment in camps affected even Germans who had lived in the respective country for a long time and irrespective of their political affiliations. The local authorities even interned those who had fled to the country of refuge to escape Nazi persecution despite the fact that they were declared opponents of the Nazi regime. Internment was a shock for those living in exile, as they felt themselves to have been placed on the same level as Nazi Germans instead of being allowed to actively fight against the Nazi regime in the receiving country.

When the Second World War began, the internees were brought together at collecting stations (first of all men, later on women and children as well) and held imprisoned in football stadiums, factories, fenced-in streets, confiscated hotels or remote islands, or they were deported abroad to countries like Canada and Australia. The conditions were often inhumane, especially in the preliminary camps at the beginning of the internment. Many died from diseases and malnutrition or committed suicide.

In many camps, which existed longer, the internees set up an extensive self-administration. They issued newspapers, and organized lectures, courses and cultural events such as theatre performances and concerts. For many of those in exile, internment was a traumatic experience that left its mark on their life and often influenced the work of interned artists. There are a great many autobiographic texts, novels, paintings and many other works of art that deal with these experiences. 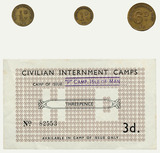 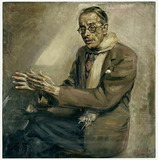