The Law for the Restoration of the Professional Civil Service 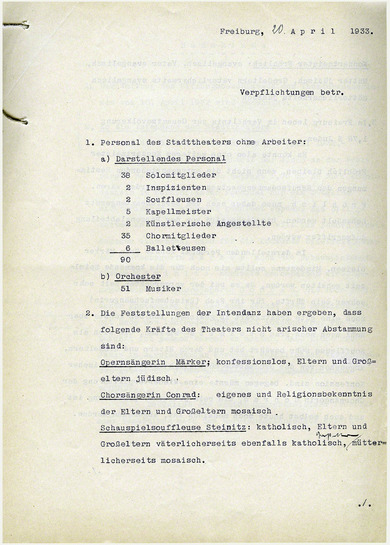 The Law for the Restoration of the Professional Civil Service

Only a few weeks after Hitler’s ascension to power, the “Law for the Restoration of the Professional Civil Service” was passed on 7 April 1933. According to it, civil servants who were active in opposition parties or had close ties to them could be dismissed. However, the law was directed mainly at Jewish civil servants and Article 3 stated that civil servants of “non-Aryan descent” should be put into retirement.

In the following weeks, the circle of people affected by the law was widened, and the family background of public employees including the staff of state-run theatres, orchestras and universities were investigated. Arnold Schönberg for example was dismissed as a lecturer in composition at the Prussian Academy of the Arts. The painter Max Beckmann lost his position as a professor at Frankfurt’s Städelschule. Numerous orchestra musicians, actors, opera singers and other artists or those who taught art experienced the same fate. Following this, many of them decided to go into exile. Because of an exception for soldiers who served at the front in World War I, the law initially affected fewer people than intended. In 1933, around 2,000 civil servants and 700 university lecturers lost their jobs. However, in a wave of pre-emptive obedience, many Jewish employees were dismissed from their positions in private companies in the art business. Their successors thus profited directly from the discriminating employment policies of the Nazis and their followers.

The establishment of the Reich Chamber of Culture in November 1933 and compulsory membership in one of the organisations under its umbrella meant the same as a professional ban for many freelance artists if their membership was rejected. In July 1933, the self-help organisation for dismissed artists, the Cultural Federation of German Jews (Kulturbund Deutscher Juden) was set up.  Until 1941, it used donations to fund numerous cultural events that it offered for a purely Jewish audience. Many of the artists who remained in Germany and worked for the Kulturbund were deported and murdered.