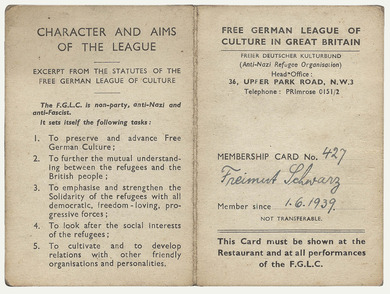 The Free German League of Culture (Freie Deutsche Kulturbund) in Great Britain was founded by German and Austrian emigrants in London on 1 March, 1939. Artists from the fields of music, literature, theatre and the visual arts as well as scientists joined together in this association. The members included the artists John Heartfield and Oskar Kokoschka as well as the composer Ernst Hermann Meyer.

The Kulturbund organized a wide range of cultural events like theatre and cabaret performances, exhibitions, concerts, opera recitals, readings and lectures. One of the main objectives of the Kulturbund was to arrange social events and to gain a mutual understanding between the emigrants and the citizens of their receiving country. However, its articles of association stated that its main priority was “to preserve and develop the free German culture” in order to pass the time until the emigrants could return to a Germany freed from Nazism.

Although the Kulturbund saw itself as above party politics, it is still said today that it had close ties to the KPD (Communist Party of Germany). There is however, no consensus about how many of the organization members were communists or how strong their influence was. The Freie Deutsche Kulturbund (FDKB) disbanded in the spring of 1946. In retrospect, its importance is seen differently by its former members. Some artists who returned to the Soviet zone of occupation, the later GDR, saw their work in the FDKB as being of political importance and said it helped to prepare them their future involvement in founding the GDR. For those members who did not intend to return to Germany, the Kulturbund was more of a social and cultural pastime which looked after the social interests of refugees, a goal that was also formulated in its articles of association.