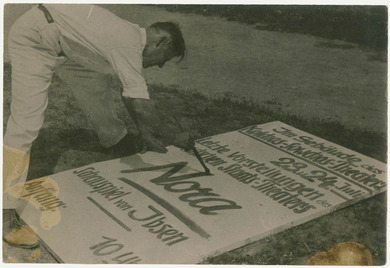 [This theatre should lead to a concentration of mental powers. It should collect all the first-class artists who were forced to leave Germany and are now scattered across all of Europe, Prague, Vienna, Paris, Copenhagen. (ed. trans.)]

Until the middle of the 1930s, the Soviet Union offered excellent conditions for actors, directors and theatre musicians seeking exile. Amongst the population of the country, in the Caucasus, the Ukraine and the Volga German Republic, were German-speaking minorities and skilled German workers who had been working for some years in the Soviet Union. Anti-fascist theatre could be performed for them.

Erwin Piscator, who since 1931 had been to the Soviet Union several times for the filming of Anna Seghers’s novel Revolt of the Fishermen of Santa Barbara, was elected as President of the Internationaler Revolutionärer Theaterbund (IRTB; International Revolutionary Theatre Association) in 1933 in Moscow. Piscator encouraged many new projects. Nonetheless, plans for a German theatre with a permanent building in Moscow were never realised.

Between 1933 and 1937 there were four stages available for theatre emigrants: the German theatre “Kolonne Links” (Left Column) in Moscow, the travelling group Deutsches Gebietstheaters Dnjepropetrowsky, the German Collectivist Theatre in Odessa, and the Deutsche Staatstheater in Engels. Tours were a feature of everyday life. The repertoire included classics from Molière to Ibsen, and new texts based on German dramas from Goethe to Büchner. Contemporary works by Friedrich Wolf were often performed. Actors transferred from one group to another and directors also produced plays in small Russian theatres. Others worked together with the Soviet film industry or as presenters on Moscow radio.

The theatre projects were interrupted in 1937 when, as a result of the Stalinist Terror, a period of persecution and flight into further countries began for German emigrants.