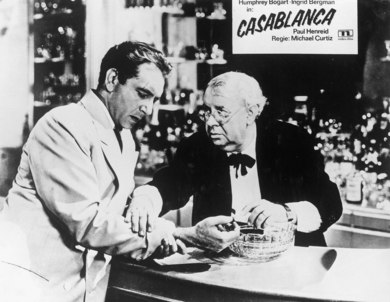 [Just as the Holocaust represents an irreparable fracture in the German-Jewish symbiosis, “exile cinema” and “cinema emigrants” remain on the sidelines of German [cinematic] development. This applies, ironically, even more so to the work of all those filmmakers who established themselves abroad; […] (ed. trans.)]

From 1933 onwards, the Nazis forced thousands of filmmakers to flee their own countries for reasons of racial discrimination or political persecution. Only a few of those who fled were able to continue with their work. Several worked as directors, scriptwriters or producers to make what can today be termed “exile cinema”. At the same time, there is no fixed genre associated with exile cinema: émigrés just as often produced comedies, musicals or costume films as they did anti-Nazi productions and Film Noir. Themes such as separation, loss of identity and state despotism were all addressed by these artists - in addition, of course, to the types of emigration and resistance stories told by films like Casablanca (1942).

Exile cinema thus constitutes its own specific category within German film, although the assignment of certain films to this category has sparked debate. Most films produced in exile used the language of the country of exile and were not aimed at a German-speaking public. Needing to adapt to the given production locations, filmmakers brought their own working methods in line with those used locally. The films in question are thus, in one sense, French, English or American – while still belonging to the German-language cinematic canon. Among the foremost examples of this tradition are the Soviet work Kämpfer, directed by Gustav von Wangenheim (1935), the French production Le Roi des Champs-Elysees by Max Nosseck (1934), the American film Hangmen Also Die (1943) by Fritz Lang and Douglas Sirk’s Hitler’s Madman (1943).