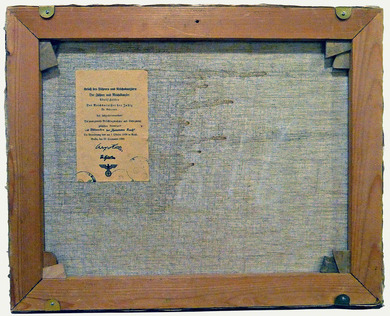 Notification of confiscation on the back of a picture
Sammlung Gerhard Schneider, Olpe, © Zentrum für verfolgte Künste im Kunstmuseum Solingen

How a destructive idea developed

Theories on the concepts of “degeneration” developed in the humanities and natural sciences in the 19th century and were eventually transferred to the arts. It was assumed that all art is organic in origin and therefore can be classified as “sound” or “abnormal”.

The Nazis concretized this approach and contrasted “the Aryan” with “the degenerate”, that is, what is deviant from the norm. All art that did not reflect the new state-imposed ideal was denounced, banned, confiscated or destroyed. The Nazis spoke of a “cleansing” of cultural life.

The concept of “degeneracy” in the art world affected the performing arts (dance, theatre, opera, film) as well as the visual arts (painting, sculpture, graphic design, architecture, photography), music and literature. In terms of content, it was mainly works that dealt critically with war and social topics that were defamed. On an aesthetic level, all modern trends, including expressionism, expressive dance or jazz were rejected. Any form of artistic experiment, for example Dadaism or the twelve-tone technique, was considered a destruction of artistic craftsmanship and was banned and defamed. Art created by Jews or communists was automatically labelled “degenerate”, regardless of its substantive or aesthetic context.