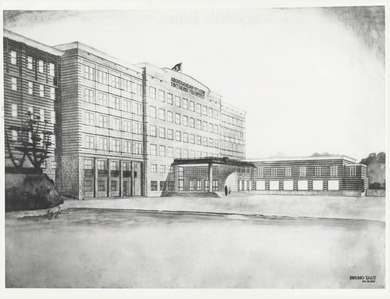 Building on the Bosphorus

The foundation stones for career opportunities for German architects in Turkey after 1933 had been laid previously. The country had been undergoing major upheavals since the early 1920s. At the end of the Ottoman Empire, Turkey became more open for modernity under the leadership of the reformist Kemal Atatürk – and this included the field of architecture. The practice of recruiting German master builders in Turkey has its roots in this decade. However, after 1933 the position of those being recruited had changed: it was now emigration instead of vocational travelling.

Bruno Taut, Wilhelm Schütte and Robert Vorhoelzer are just a few of the important exiled architects. As a collective, those named were among the German architects who influenced the emergence of a Turkey that was extremely divergent when examined closely. They were influential in major individual projects that ultimately characterised the skyline of the new capital Ankara and also the civil planning and architectural training of the country.

This expressed itself most manifestly in the building of theatres or schools or university buildings. Thus Bruno Taut's design for a building for the faculty of language, history and geography at the university of Ankara became a symbol for the “intellectualisation of the [Turkish] nation” (Dogramaci, Kulturtransfer und nationale Identität, [Cultural Transfer and National Identity] 2008). However, emigrant architects did not only receive commissions from public authorities. The elite among Kemal's inner circle had private mansions built according to the architectural principles of the Avant Garde in Western Europe. The high esteem in which this cultural transfer was held and from which German-speaking architects from Austria and Switzerland also profited, only began to fade in the 1940s, when an era of historical nostalgia took hold in Turkey. For example, when he died in 1938, Bruno Taut's reputation was such that his funeral was declared a state occasion.

The career of Martin Wagner demonstrates that despite the recognition and handsome remuneration he enjoyed, not every German architect settled in Turkey after emigration. Many, like Wagner, moved on or returned to Germany after 1945. The legal status of such emigrants can still be found in the Turkish language in the expression “haymatloz” [from the German ‘heimatlos’ = without a home country].