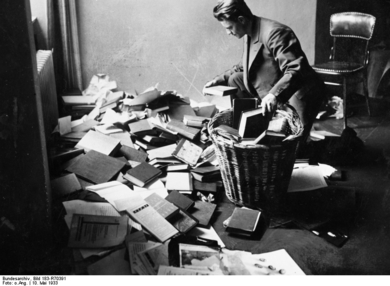 Books collected for the burning of the books on 10 May 1933, photographer unknown
Bundesarchiv, Bild 183-R70391

[I value all writers whose books were burned by the Third Reich, even those among them I never knew of beforehand, because the fire purified and ennobled them and brought them close to me. (ed. trans.)]

Book burnings took place in many German towns and cities on 10 May, 1933 – only three months after the Nazis came to power. Lists compiled by librarian Wolfgang Herrmann, originally planned for a reorganisation of Berlin’s national and local libraries, were used to prepare such actions.

This so-called “Action against the Un-German Spirit” was planned and carried out mainly by the German Student Association of the NSDAP in collaboration with a series of other organisations and institutions. A poster campaign, a boycott of some professors, the first “wild” book burnings and collecting books throughout the Third Reich to be burned paved the way for the campaign to ban everything considered “Un-German” from private and public life.

The lists mostly contained works by Marxist, Jewish and pacifist authors and its 131 names included Bertolt Brecht, Hermann Essig, Lion Feuchtwanger, Rudolf Geist, Erich Kästner, Maria Leitner, Max Mohr, Ludwig Renn, Joseph Roth, Anna Seghers, Kurt Tucholsky, Alex Wedding, Arnold Zweig along with many others. The “climax” of these activities, which took place throughout the Third Reich, was seen to be the dramatically orchestrated book burning on Berlin’s Opernplatz. It was there that, on 10 May 1933, Joseph Goebbels held his “fiery address”. The ceremonious reading of the Twelve Theses was accompanied by “fire oaths” while students threw books onto bonfires before the eyes of large groups of onlookers. Many newspapers had encouraged people to take part beforehand and reported about the night’s happenings in euphoric tones. Protest remained at an absolute minimum.

For many authors, the book burning was the beginning of a violent and irrevocable break with their life and work and it was followed in many cases by imprisonment, torture, flight and exile. Others who did not manage to escape were deported or murdered. Many took their own lives in desperation.

After 1945, the slow process of examining the past got underway, including remembrance of the burned and ostracized books and their authors. In 1975, the journalist Jürgen Serke embarked on a search for survivors as part of the research for his book Die verbrannten Dichter [The Burned Poets]. A great many stories could be added to Georg P. Salzmann’s commentary, “There’s a story behind every book” (in Weidermann: Das Buch der verbrannten Bücher, 2008); his extensive collection of titles which were thrown to the fires in 1933 has been open to the public since 2009.