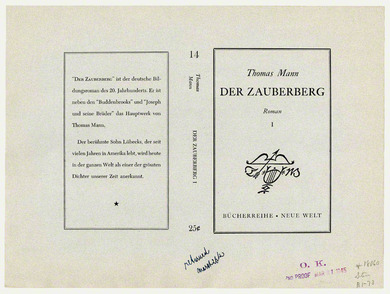 [One must create one's destiny, accept what cannot be changed and shape it into something new and fruitful. (ed. trans.)]

When the Nazis took power, Gottfried Bermann Fischer, son-in-law of the founder of the publishing, ran the Berlin-based S. Fischer Verlag. In 1936 he resolved to move the publishing house to Austria in order to continue to publish the authors who were blacklisted and banned in Germany. He sold a part of the business, which remained in Berlin with the authors who were not under threat as S. Fischer Verlag under the leadership of Peter Suhrkamp. He himself moved with his wife and children to Vienna and founded the Bermann-Fischer Verlag there.

After the annexation of Austria in 1938, the family was forced to flee. They went to Sweden following stints in Italy and Switzerland. In cooperation with the Stockholm-based Bonnier Verlag and as distribution network with the Amsterdam-based Querido and Allert de Lange publishing houses, the company was able to continue its work. As a trained book designer, Brigitte Bermann Fischer handled the design and graphic advertising for many titles. The Bermann Fischer Verlag continued to publish German-language literature, albeit not for the German market, but as an exile publishing house for German-speaking émigrés throughout the world.

After the invasion of the German Wehrmacht in 1940, Bermann Fischer was taken into protective custody for five weeks and was later expelled from the country. The family fled to the US while the publishing house continued its work in Stockholm. In New York the publisher and Fritz Landshoff founded the English-language publishing house L. B. Fischer Publishing. Shortly before the end of the war, the US military commissioned Bermann Fischer to create a paperback series for the German prisoners of war in the US: under the series title “Neue Welt”, Thomas Mann's Der Zauberberg was published as the first volume in the series.

After the war, Bermann Fischer returned to Europe. An attempt to reunite the two parts of the publishing house that had separated in 1936 failed following a falling out with Peter Suhrkamp. Some of the authors switched to the newly founded Suhrkamp Verlag in 1950.