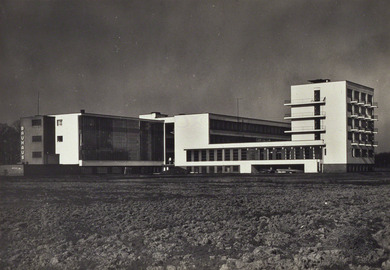 [Bauhaus was an idea, and I think this is the reason that it had such a tremendous influence on every progressive school in the world – it was an idea. You cannot attain such a resonance with organisation or with propaganda. Only an idea has the power to spread itself so far. (ed. trans.)]

Ludwig Mies van der Rohe in a speech on the 70th birthday of Walter Gropius, 18 May 1953

The Bauhaus was founded in 1919 by Walter Gropius as a school of design in Weimar with the aim of unifying art and handcrafts. The training course consisted of theoretical and practical instruction in the furniture-making, weaving, metal, wall painting, typography, ceramics, stage and sculpture workshops.

A change of government in Weimar in 1924 meant that subventions for the state-owned school were restricted. When the school was forced to close in 1925, the Mayor of Dessau Fritz Hesse campaigned for his town to become the new location for the school. The Bauhaus started training young designers again in the same year and in 1926 it moved into the new building designed by Gropius. In 1928 Hannes Meyer succeeded Gropius as Bauhaus Director, running the school according to the principle of “the needs of the people before the need for luxury”. Two years later he was dismissed without notice for political reasons. Afterwards Ludwig Mies van der Rohe took over the directorship. However, in spite of his intensive efforts, he could not prevent the Bauhaus from closing for good in 1933.

The style of art and architecture taught in the Bauhaus did not fit in with Nazi thinking. The flat-roofed architecture was dismissed as “desert architecture” while the abstract paintings were simply not understood. The advance of industrialisation and standardisation had led to a fear that handcraft would be swept aside. Unconventional teaching methods, willingness to experiment, the informal organisation of leisure activities and the mostly left-wing political activities of the students aroused indignation. In addition the proportion of foreigners studying at the institute was considerably higher than at comparable art schools. However, it was not only the international nature of the lecturers and students that was regarded critically, the social aims of the Bauhaus, which was supported by social democrats, were regarded with suspicion by its opponents: the accusation levelled at the Bauhaus was one of cultural Bolshevism. Many of those associated with the Bauhaus were prohibited from painting and exhibiting as they were held to be the founders of the “degenerate art” movement.