[The Artists' International Association opened doors to us in the guest country, and we organized ourselves in the Freier Deutscher Kulturbund at the national level. (ed. trans.)]

The sculptor Heinz Worner in a magazine article, 1962

The Artists' International Association (AIA) was founded in 1933 as a politically and socially committed organization of left-wing artists in London; it was subsequently reorganized in 1935. It was an association of painters, sculptors, graphic artists, craftspeople, designers, art educators, art students, art historians and curators who supported cooperation between artists in furtherance of the goals of peace and democracy. Members included the exiles John Heartfield, René Graetz and Theo Balden.

The AIA organized exhibitions of its members and also supported other associations with similar objectives, such as the Freier Deutscher Kulturbund (FDKB). During the war years, it held regular solidarity exhibitions.

The Artists' International Association also arranged contacts between exiles and British artists and art lovers. The AIA exhibitions, for which catalogues were often published, were discussed in the British press. These helped the artists to reach a wider audience and also raised awareness for the AIA and its members.
In 1953, it relinquished its original goals and existed until its dissolution in 1971 purely as an exhibition group. 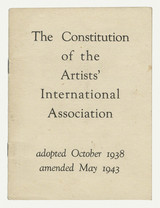