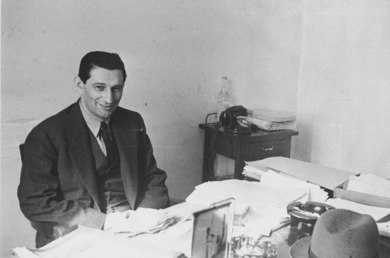 The American Jewish Joint Distribution Committee (JDC) was originally founded in 1914 to help Jewish victims of the First World War. In the interwar years, the focus of the Jewish-American organisation was initially on the impoverished Jewish communities in the Soviet Union and Eastern Europe. After 1933, the relief organisation also aided Jewish communities in Germany with financial assistance. The JDC, which had offices in numerous European countries, also helped in the organisation of emigration and paid for travel and visa costs.

This part of its work increased sharply after the November pogroms of 1938, as ever-increasing numbers of Jewish Germans wanted to leave the country. After the beginning of the war, the numbers of refugees rose once again. Initially working out of Paris, from June 1940 onwards the JDC coordinated its aid efforts from Lisbon: the Portuguese capital became one of the central transit stations on the way to overseas destinations.

The rabbi Joseph J. Schwartz became the European director of the JBC in 1940. His efforts at providing relief sometimes exceeded the bounds of legality – the committee paid for false papers, for example. Schwartz not only ensured that Jewish refugees who arrived in Lisbon with valid papers were able to travel onwards from there by ship, but also provided assistance to inmates of French internment camps as well as French hospitals, orphanages and soup kitchens. The group also sent food packages and money to the Theresienstadt ghetto, to Poland and other German-occupied areas. These activities were complicated by the US entry into the war as the JDC was no longer able to maintain offices in hostile countries. Through the offices of the JDC member Saly Mayer in Switzerland, however, the organisation still managed to continue distributing financial help in Eastern Europe and thus support numerous aid campaigns.

After the war, the JDC assisted Jewish “displaced persons” in Germany, Italy and Eastern Europe and after the founding of the state of Israel organised trips to the country.