At the time of the Nazi regime in Germany, most of the African continent was still marked as the territory of European colonial powers. France, for instance, had far-reaching influence in the northwest, while Britain controlled territories along the entire north-south axis of the continent. Spain, Portugal, Italy and Belgium completed the group. Even independent states such as Egypt, South Africa, Liberia and Ethiopia were strongly influenced by the European countries, regardless of their formal status. Their alliances and enmities had a direct impact on the relationships between countries in Africa.

With regard to emigration from Germany to Africa as the result of racial persecution, there was a continuing influx of German Jews to South Africa from 1933, i.e. to a country "which itself operated an active racial policy" (Wojak, South Africa, 1998). The refugees therefore had to contend not only with the policy of apartheid, but also with the reserved attitude of already resident local Jews.

The North African Maghreb countries did not experience an exodus of German refugees until a Franco-German armistice came into force across the border in France in the middle of 1940. The writers Kurt Kersten and Robert Breuer lived  there temporarily. The dancer Eugenia Eduardova also spent several years of exile in Morocco from 1942 as a last resort after missing a ship to Cuba. The level of specific emigration of outlawed artists to Africa was small. Ernst May represents a good example here although, significantly, he initially sought and led the life of a farmer in exile in Tanzania.

Familiarity with an area gained on previous trips, the positive experiences of friends and colleagues as well as the prospect of a "favourable infrastructure for work" - cited by Jutta Held as the central criteria of artists forced into emigration after 1933 (Held, Bildende Kunst, 1998) - were not fulfilled by the African continent despite, or perhaps because of, its size and cultural diversity. Added to this was the aforementioned colonialism which resulted in tense relations between settlers and the African population. However, as the review shows, this specific constellation ultimately offered European emigrants an opportunity to belong to a privileged social stratum in exile despite having lost their home and possessions. 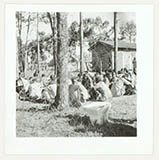