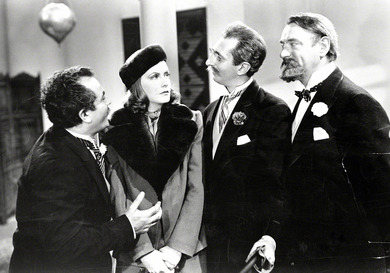 For actors it was particularly difficult to find work in exile in foreign-speaking countries. While many emigrants, to the USA for example, picked up day-to-day English relatively quickly, their accents generally betrayed their origins. This meant that they were almost always cast as foreigners in American films, that is, in “accent roles”. And naturally that included playing Germans, which at that time usually meant: Nazis.

Conrad Veidt, Hans Heinrich von Twardowsky, Fritz Kortner – in these films the oppressed wore the uniform of the oppressor. Because producers didn’t hold the audience to be particularly sensitive to the nuances of accent, German actors were also cast in Russian (Oscar Homolka), French (Luise Rainer) and even Japanese roles (Peter Lorre).

In an interview in Aufbau in early 1943, agent Paul Kohner cautioned against overestimating the effects of this specialisation: “The studios reflect the upheavals in Europe and are populated by Scandinavian, French, Polish and Czech underground fighters, by Russian, Yugoslavian and Greek guerrillas, by Heydrich-mugs. Foreigners playing ‘foreign characters’ is pretty much the rule these days [...]. [...] Nonetheless you can’t generalise and say that they’ve all made it just because of these extraordinary times, nor that just anyone who comes to Hollywood will find their place.” (ed. trans.)