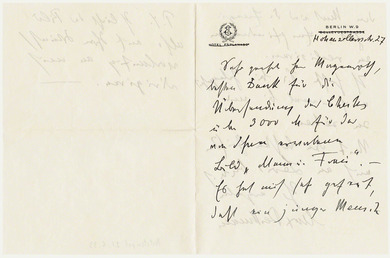 Stephan Lackner already encountered Max Beckmann’ s art as a young man in Frankfurt am Main at the house of a family friend of the judge Ernst Levi. He was often a guest there, as their son Bernhard Heiden was his best friend. The works by Max Beckmann that he saw there made a great impression on him and Lackner bought his first Beckmann, the lithograph of Frau Parcus (Hofmaier 206), when he was only 18.

The two men became better acquainted with one another in 1933 when Lackner bought his first painting by the artist, Man and Woman from 1932 (Göpel 363). He had seen it in the storerooms of the Angermuseum in Erfurt, at the Beckmann exhibition which had already been closed down by the propaganda ministry. Max Beckmann never forgot the fact that this young author had taken the courageous step of buying the work of an “outlawed” artist, especially as this was the only testimony of support that he received him during this difficult time. The painter wrote the following to Lackner on 21.6.1933: “I was very happy to see a young person who has the courage and energy to act on his sensibilities.” (ed. trans.) The sale was arranged by Ernst Levi.

This painting laid down the foundations for the world’s largest private collection of Beckmann’s works, which at times contained more than 60 paintings and several watercolours. The agreement reached between collector and painter gave the latter a regular monthly income, in return for which he “delivered” paintings (see Stephen Lackner’s letter to Max Beckmann from 3.9.1938).

One joint project that the author and painter worked on was Lackner’s play Der Mensch ist kein Haustier from 1937, for which Beckmann created the illustrations. The artist held the young Lackner in great esteem and also gave constructive criticism of his works on occasion. For the passionate reader Beckmann, being able to talk to the author about what he read was important.

Stephan Lackner, who was always conscious of the influence that the painter had had on his life, saw himself as “Beckmann’s student in another material” (Stephan Lackner in a letter to Erhard Göpel dated 15.2.1954.)

The extent to which the author admired the painter can be seen in a letter by Lackner to the artist from 11 September 1948, shortly before Beckmann’s second departure for the USA: “All the best for the crossing […] Surrounded here by Picasso, Toulouse and many others, it has become very clear how superior and great your works are. You are undoubtedly the uncrowned king of modern art.” (ed. trans.)