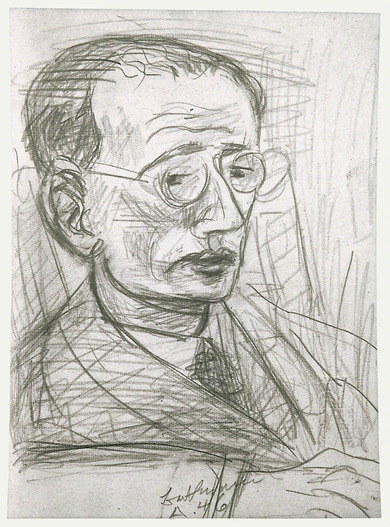 Rudolf M. Heilbrunn came from a bourgeois, liberal and assimilated Jewish family from Frankfurt. He attained his doctorate in law under jurist Hugo Sinzheimer in 1922. As the son-in-law of jeweller Robert Koch, he also worked in the jewellery business, as well as being a private scholar, author and booklover. In 1938 he emigrated via Switzerland and England to Holland, where he lived through the War and German occupation with his first wife. In December 1942 Heilbrunn was taken to Westerbork, the notorious transit camp for Dutch Jews, but was luckily released 9 months later. He wrote his memoirs there, the typescript of which can be found in the Max Beckmann Archive and which were published in 2000 under the title Zehn Nachtwachen [Ten Night Watches], an important document for research into the history of German Jews from the German Empire right up to the Third Reich. Rudolf M. Heilbrunn lived for some time in Switzerland during the fifties and returned to Germany in 1962.

Heilbrunn wrote down vivid memories of Max Beckmann. Although he had been familiar with the artist’s work since 1919, he did not become better acquainted with Beckmann until 1944 in Amsterdam. Beckmann drew Heilbrunn in 1946. In Rotterdam, just before their departure for the USA on the “Westerdam” on 29 August 1947, Heilbrunn introduced the Beckmanns to Thomas and Katja Mann, who were also sailing that day. “Before that, Heilbrunn came to say his goodbyes, and later he had a large flower delivered to Quappi on board.” (ed. trans. Max Beckmann’s diary, 29.8.1947)