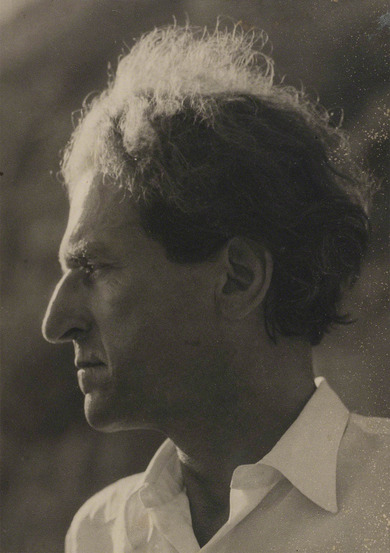 Wolfgang Frommel was tangentially connected to the circle around Stefan George – the man himself he only met once. The author achieved greater notoriety with the publication of his book Der dritte Humanismus (1932; tr. The Third Humanism), which was banned by the Nazis shortly after its release. In 1937 he emigrated to the Netherlands via Switzerland and France and settled there in 1939. His greatest achievement was enabling a group of young Jewish boys to live in hiding during the German occupation of the Netherlands in a hideout provided by Gisèle van Waterschoot van der Gracht in her apartment at Herengracht 401 in Amsterdam. Together with her, Frommel founded the literary magazine Castrum Peregrini after the War in 1951. Frommel's support, which consisted primarily in reading classic literature and reciting poetry, was instrumental in enabling the group of “hideaways” to endure their long ordeal of living in fear.

Max Beckmann and Wolfgang Frommel met in Amsterdam in 1941 and saw each other frequently thereafter; the writer was very interested in the painter's work and became an important conversation partner for Beckmann during his time in the shadows. According to Erhard Göpel, it was Frommel who encouraged Beckmann to examine the exile situation through the Argonauts' saga. The immediate result may have been the group portrait Les Artistes mit Gemüse [Les Artistes with Vegetables]from 1943, which in addition to Beckmann and Frommel also depicts Herbert Fiedler and Friedrich Vordemberge-Gildewart. Beckmann's last triptych, Argonauten[The Argonauts]from 1950 may also have originated in his conversations with Frommel at that time as well.ts