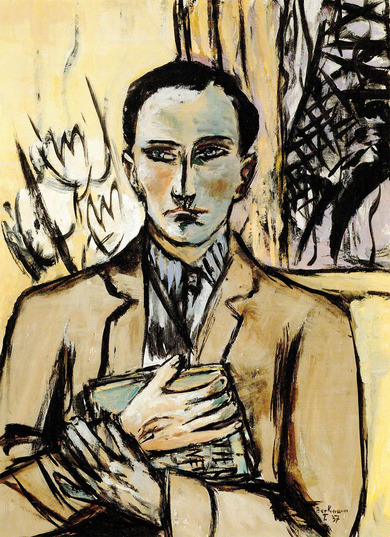 [If a painter can be the teacher of a writer, then I see myself as his [Beckmann’s] student. (ed. trans.)]

Born as Ernest Gustave Morgenroth in Paris, the four-year-old boy who was later to become a well-known author under the name “Stephan Lackner” left Paris with his family at the outbreak of World War I and went to Berlin. From 1919, the Morgenroths lived in Bad Homburg before moving to Frankfurt am Main in 1925. Stephan Lackner studied Art History and Philosophy there and in Berlin. He gained his doctorate title at the University of Giessen in the summer of 1933 with a dissertation titled Sprachzeichen und Gegenstand. Die Sprache als Instrument der Logik. That same year he had to emigrate with his family to Paris. To escape persecution by the Nazis, he began using the “non-Jewish” sounding pseudonym “Stephan Lackner” in 1935, the name he also used when working for the newspaper Das Neue Tage-Buch published by Leopold Schwarzschild. It was also during this period that he made the acquaintance of Thomas Mann and Walter Benjamin.

He wrote the poetry volume Die weite Reise in 1936 following a trip to the Soviet Union and the play Der Mensch ist kein Haustier the following year. In 1938, Lackner worked on the protest exhibition 20th Century German Art at London’s New Burlington Galleries, attending the show with Max Beckmann. It was also in that year that he published his work Max Beckmann’s Mystical Pageant of the World and concluded an agreement with the artist in Bandol concerning the regular purchase of his paintings (see the letter from Stephan Lackner to Max Beckmann dated 3 September 1938).

The following years saw the publication of a series of novels and plays by Lackner, but also texts expressing his opinion on contemporary issues as well as counselling books. In addition to this, he composed numerous pieces of music and published several writings about Max Beckmann and his art.

Lackner was awarded the Federal Cross of Merit 1st Class in 1982. He died almost 50 years to the day after the death of Max Beckmann, who had played such an important role in his life.