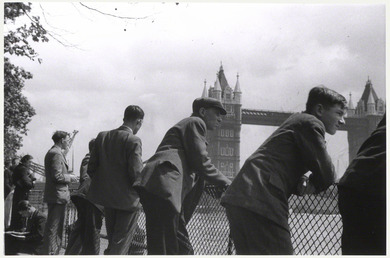 [Now, with unintentional irony, I adopted as my home a country where arrows are only used on dartboards, suspicious of all causes, […] bored by ideologies, sceptical about utopias, […] enamoured of its leisurely muddle […] where strikers played soccer with the police]

Right into the 20th century, Great Britain enjoyed a reputation as a liberal country for immigration and for those seeking asylum. However, by 1920, the British government severely restricted immigration laws, mainly to protect the domestic employment market. After the Nazis seized power in Germany, the British government reacted by biding its time and made some concessions to Nazi Germany internationally. Accordingly, Britain’s asylum policy did not at first change.

In 1938, following the annexation of Austria and Sudetenland and in the wake of the violent attacks during the November pogrom, Great Britain accepted large amounts of refugees from Germany, Austria and Czechoslovakia. The entire number of those who went into exile between 1933 and 1941 is estimated to be between 50,000 and 80,000 people, more than two-thirds of whom entered the country between November 1938 and September 1939.

After the outbreak of World War II, the British authorities set up tribunals for foreigners with the job of testing the “loyalty” of German and Austrian citizens who were now living in Britain. Following German occupation of the Benelux countries in 1940, these checks were extended to include thousands of German-speaking refugees. Many of them were kept in internment camps, on the Isle of Man for example, while some internees were deported to Canada or Australia. Many of the camps were closed again during the year 1940 and the internees released.

It was difficult for the immigrants to find work, because the jobs in many professions were reserved for British citizens only. As the demand for domestic staff had risen greatly during the 1930s and 1940s, around 20,000 mostly Jewish women were able to work as servants during their period of exile in Britain. One particularity was the immigration of Jewish children to Britain. About 10,000 children were sent into exile in Britain on so-called child transports without their parents, and most of them never saw their parents again. Many of those living in exile were dependant on the support of aid organisations, dozens of which were set up in London. Associations like the German PEN Club in Exile and the Free German League of Culture were established to help exiled artists in their work. Such associations published books, as well as organising exhibitions, theatre performances and other support activities.