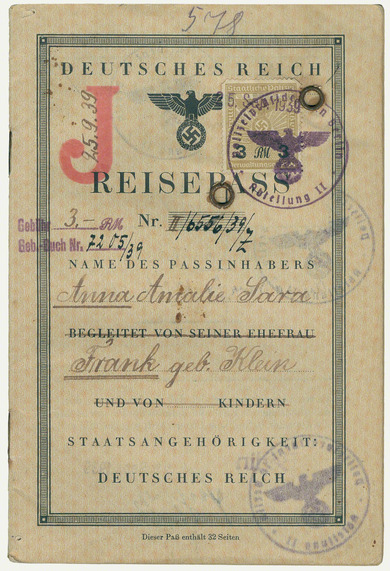 From elements of anti-Judaism, the religiously-grounded antipathy towards Jews which accompanied Christianity from its inception, the 19th century saw the development of anti-Semitism, which also encompassed social and racist motives.

The Nazis, with their pseudo-scientific racial theory, made anti-Semitism a doctrine of the state focussed initially on the exclusion of Germans classified as Jewish by their definition. On 1 April 1933, a country-wide boycott campaign was instituted, followed by professional bans, the establishment of the Nuremberg Laws in 1935 and further provisions which, step-by-step, excluded Jews from all public life. Businesses whose owners were Jews or considered Jews by the Nazis were “Aryanised”; in 1939 identifying cards stamped with a “J” were introduced; in 1941 the “yellow star” was introduced and had to be worn visibly. Many of those affected by such discrimination chose to leave Germany. Their number increased drastically after the violent pogroms of November 1938.

The new laws were accompanied by propaganda. In the press, films, plays and exhibitions, Jews were pilloried with caricatures, banners and prohibition signs. To stoke anti-Semitism in the general population, timeworn anti-Semitic stereotypes were trotted out: Jews were depicted as devious, greedy, sexually perverted and sickly. There was, it was further alleged, a Jewish conspiracy to attain world dominion – which would be the demise of the “Aryan” people. Many Germans profited from the policies toward the Jewish population such as the confiscation and auctions of the possessions of their Jewish neighbours.

The persecution of Jews was conducted with unparalleled totality by the Nazis: the systematic exclusion, deprivation of rights and dispossession culminated in the intention to exterminate the Jews of Europe. The result was a genocide in which almost six million Jews were murdered.