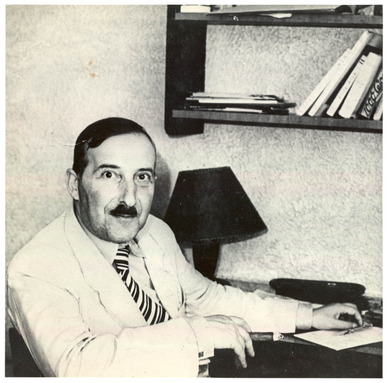 [My literary work, in the language in which I wrote it, was burned to ashes in the same land where my books made friends of millions of readers. And so I belong nowhere, and everywhere am a stranger, a guest at best. Europe, the homeland of my heart's choice, is lost to me, since it has torn itself apart suicidally a second time in a war of brother against brother. (ed. trans.)]

Stefan Zweig came from a prosperous merchant family and spent his childhood in Vienna in an upper-middle class environment. During his philosophy studies he published his first poems and feuilleton texts in the Neue Freie Presse, and also made his name as an author of stories, novellas and essays, and as a translator from the French language. In the First World War, Zweig was called up to the archive service of the Austrian army and, after being initially carried along by the general enthusiasm for the War, was transformed into a convinced pacifist by his experience of the military confrontations. After the War, he settled in Salzburg, where he wrote a number of works, among them one of his most famous, the novella collection Sternstunden der Menschheit (1927).

In March 1933, the widely-read books of this much-travelled cosmopolitan fell victim to the Nazi book burnings due to his Jewish origins, his estimation of the works of Sigmund Freud and his rejection of European National Socialism. Zweig reacted to the hostilities of the anti-Semitic regime with a complete renunciation of everyday politics. He withdrew his commitment to collaborate on Die Sammlung, the exile magazine published by Klaus Mann, due to its openly anti-Nazi character – to the annoyance of many of his emigrant colleagues.

Following the establishment of the Austro-fascist corporate state and a house search, in February 1934 Zweig fled initially to England, then on to Brazil in 1940 via New York, Argentina and Paraguay. There he was issued with a permanent residency permit, for which he expressed his gratitude with the publication of Brasilien. Ein Land der Zukunft (1941). In exile Stefan Zweig supported aid organisations such as the Emergency Rescue Committee, and together with his first wife, Friederike Zweig, helped colleagues such as his compatriot Joseph Roth. Aghast at developments in Europe, on 23 February 1942 the author of the celebrated Schachnovelle (1942) took his life together with his second wife, Lotte Zweig. The Vargas regime paid its last respects to the Jewish couple Zweig with a state funeral performed according to Jewish rites.