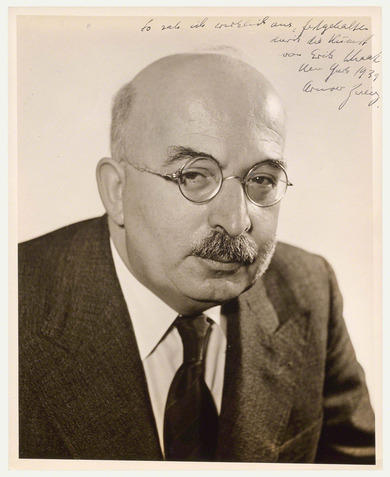 A modest upbringing as the son of a Jewish settler in Katowice in Silesia, a committed Prussian soldier during World War I, then a pacifist, a Zionist, a socialist: the life of Arnold Zweig appears to be full of contradictions. However, these supposed contrasts describe his lifelong confrontation with his own identity.

Inspired by his father, Zweig confronted the concept of Zionism early on. As a soldier he was stationed in what is now Lithuania, and after meeting Eastern European Jews there, he became a supporter of Zionism. From 1918 onwards he wrote for Jewish newspapers, opposing the growing anti-Semitism in the Weimar Republic. He already harboured plans to emigrate to Palestine. Zweig became an enemy figure for far-right and anti-Semitic parties. When threatening letters were sent to his residence in Starnberg in 1923, the family moved to Berlin. From 1925 onwards Zweig published critical articles and novels covering political themes in the Weimar Republic, earning him recognition even amongst a non-Jewish audience. He formed close friendships with Sigmund Freud, Lion Feuchtwanger, Bertolt Brecht and Carl von Ossietzky. Despite many warnings from his friends, he only left the country in March 1933, later moving from Prague to Sanary-sur-Mer. At the end of 1933 he emigrated to Palestine. The Hebrew nationalism was a disappointment for the Prussian Zionist Zweig, who wrote in German, and he felt restricted. Isolated in Palestine, he moved to the Soviet Occupation Zone in 1948, which later became the German Democratic Republic. There he was celebrated as a writer and became an important representative of literature in the GDR.