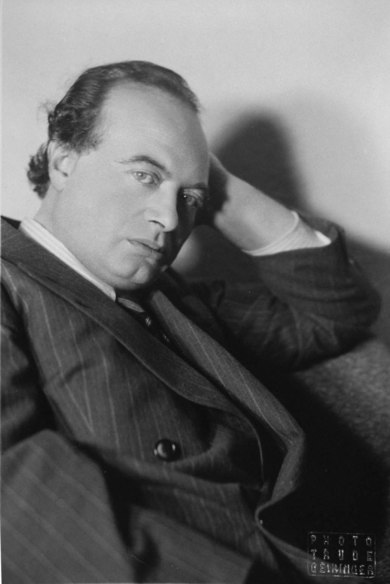 With his expressionistic verse, which dealt with the deliverance and fraternisation of humanity, Franz Werfel celebrated great success in 1911. Humanity and grappling with an ethically-grounded form of Christianity remained – even while in exile – recurring themes for Werfel.

With the annexation of Austria, Werfel left his homeland. As the author of the novel Die vierzig Tage des Musa Dagh [Forty Days of Musa Dagh (1990)], which dealt with the Armenian genocide in 1915, Werfel was regarded as a pacifist by the Nazis. His texts were classified as a “threat to public safety and order”. Thus is 1938 he and his wife Alma Mahler-Werfel moved to the southern French fishing village of Sanary-sur-Mer. After France was occupied in 1940, Werfel and his wife made an unsuccessful attempt to leave the country and had to spend several weeks in Lourdes. In his desperation, he swore an oath: If he reached the coast of America, his first act would be to write the life story of Saint Bernadette Soubirous.

Together with Golo und Heinrich Mann, he crossed the Pyrenees on foot and later travelled to California. He kept his word and in 1941 wrote Das Lied von Bernadette. In California Werfel's wife – as before in Vienna – held a salon visited by guests such as Thomas Mann and Arnold Schönberg. Werfel's books were translated into English in the US and became popular successes. Werfel, who had already had health problems when he crossed the Pyrenees, died of a heart attack in 1945.