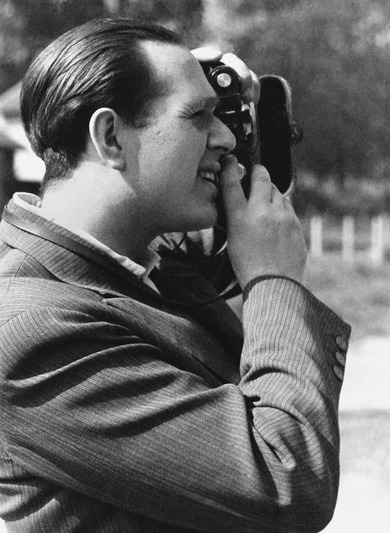 [Fred Stein […] has a dynamic nature. In a posed photo he would see an impairment of truth, maybe even a falsification. He goes for his victim like a hunter goes for his prey and slays them. (ed. trans.)]

Fred Stein came from an intellectual family, his father a rabbi and his mother a teacher of religion. He was already politically active against the emerging fascism in Germany as a youth. After finishing his law studies, in 1933 the Nazis prevented him from finishing his thesis. Alerted by the warning of a friend, Stein escaped impending arrest by fleeing into French exile. He moved into a flat in Paris with his wife Lilo Stein and it soon became a meeting point for the German-speaking émigré community. As it wasn't possible for him to work as a lawyer, Stein began to occupy himself intensely with the art of photography. With a Leica camera, a wedding gift from his wife, he roamed the streets of Paris looking for motifs. Among the portraits he took were those of exile acquaintances like Willy Brandt, Hannah Arendt and Arthur Koestler.

After the beginning of the war, Fred Stein was interned as an “enemy alien”, and one year later he managed to escape from the German advance to the South of France. From Marseille, with the help of the Energency Rescue Committees (ERC), he emigrated with his family to New York. While his wife took care of their livelihood in the metropolis, Stein succeeded in establishing himself more and more as a professional photographer. Thanks to his many acquaintances, he was able to take portrait photographs of artists like Norman Mailer, Marc Chagall and Georgia O'Keeffe. Prominent German exiles like Albert Einstein, Thomas Mann and Annette Kolb also sat for him. At the same time Stein documented the cross-cultural diversity of his new hometown, which provided him with the occasion for a great number of social and milieu studies. The New York Times and the New York Herald Tribune were among the magazines that published his work. Stein's oeuvre featured in several exhibitions and monographs.