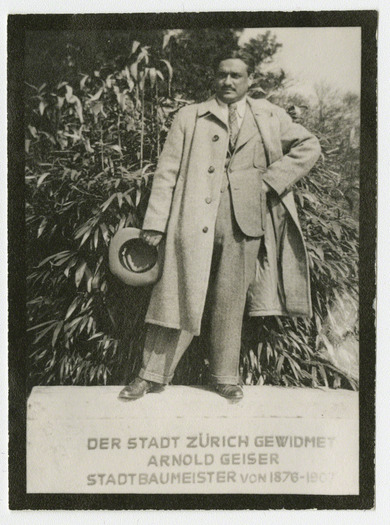 [Thanks to the fact that we were able to develop our artistic abilities freely in Switzerland during the twelve-year intellectual close-down of Central Europe and could practice on the new progressive products of dramatic world literature, we were able to gain some advantages which we assume can be of use for the inner alignment of the defeated German nation  (ed. trans.)]

Before 1933, Leonard Steckel was a successful actor in contemporary plays performing alongside well-known colleagues like Helene Weigel or Alexander Granach. He was one of the most important actors on the avant-garde stage of Piscator. He had a long, but not always harmonious friendship with the director Erwin Piscator that also survived the years in exile. Steckel performed in his last Berlin première on 11 March 1933.

When the actor returned from filming in Vienna and an operetta appearance in Scandinavia in May, the situation in Berlin’s theatres had changed drastically and many Jewish actors and directors had already been forced out. Steckel decided to emigrate with his wife, the dancer Jo Mihaly. While still searching for opportunities to leave, he received a telegram from Ferdinand Rieser, director of Zurich’s Schauspielhaus theatre saying: “The assignment is perfect. Come immediately. Do you have a tuxedo?”

In the years that followed, Steckel worked both as a character actor and stage director at the Schauspielhaus in Zurich, which was the only German-speaking stage during the Nazi era that performed works uncensored which had been banned in Germany. During his period in exile, Steckel staged more than 120 first nights and premières, among these Galileo Galilei and The Good Person of Szechwan by Bertolt Brecht. Steckel suffered from losing his homeland and longed to return to Berlin. From 1946 he made efforts to get back to Germany and ultimately returned to Berlin for good in 1949.

Acting:
Old extortioner in Volpone by Stefan Zweig, 1927
Psychiatrist in Hoppla, We‘re Alive by Ernst Toller, 1927
Peachum in The Threepenny Opera by Bertolt Brecht, 1928
Davison in Leonce and Lena, 1935