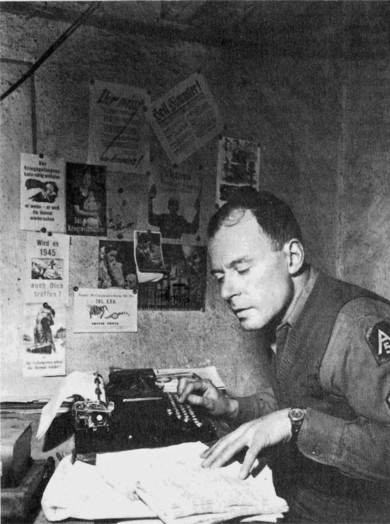 An Autobiographical Chronicler of his Time

[But this ill-fated, vexed, guilt-ridden people, do I not belong to them? I feel a share of the guilt. (ed. trans)]

Of Thomas Mann’s six children, all of whom were active as writers, his eldest son, Klaus, left behind the most extensive work – and the most important from a literary standpoint. He published his first novel Der fromme Tanz [The Pious Dance] at the age of 19. By the end of the Weimar Republic, two more followed – along with plays, novellas and short stories. Mann developed into a prolific author who distinguished himself above all as an essayistic and autobiographical chronicler of his time. After the appointment of Hitler as Reich Chancellor and the subsequent banning of Mann’s books, which were publicly burned in 1933, as a writer he devoted himself primarily to the anti-Nazi resistance that he organized from European exile beginning in 1933 and from American exile as of 1938 – restlessly travelling back and forth between different places and different countries. In Amsterdam, as early as 1933 he founded the exile magazine Die Sammlung [The collection], and he was also active in aid organizations and associations, such as the P.E.N. Centre of German-Speaking Authors Abroad. From then on, his sustained involvement with the political and social roots of the Nazi regime and the attendant social circumstances took on great importance in his work: Mephisto (1936), undoubtedly his most famous novel, follows an artistic parvenu to depict the temptations of an opportunistic arrangement with the new ruling powers. Der Vulkan [The Volcano], which was published three years later by the Querido Verlag in Amsterdam, sketches out a vivid panorama of highly varied groups of exiles.

Together with his older sister Erika, to whom he felt a strong connection throughout his life, Klaus Mann undertook several lecture tours through the USA, publicizing his two English-language books Escape to Life (1939) and The Other Germany (1940). In 1943 he became an American citizen and in the same year he joined the US Army in Europe. As a correspondent for the Army newspaper The Stars and Stripes, he visited devastated Germany in 1945; afterwards, he lived in Rome, Amsterdam, New York and California. Tormented by writer’s block, a heroin addiction of many years, and political disillusionment, Klaus Mann took his life on 21 May 1949 with an overdose of sleeping pills.