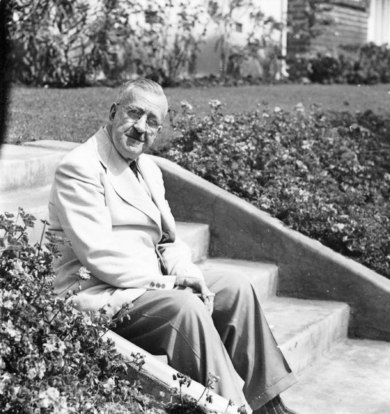 [Emigration alone is enough to express the facts and relationships. It is the voice of a people who have become silent, and it should be so for the whole world. … Emigration will insist that with it, the greatest Germans were and are, and that means in unison: the best of Germany. (ed. trans.)]

After starting his career as editor of the conservative monthly Das zwanzigste Jahrhundert [The twentieth century], Heinrich Mann advanced from his beginnings in an upper middle class merchant family from Lübeck to become one of the most influential critics of Wilhelmine Germany. The popularity of his satiric novels Professor Unrat [Small Town Tyrant] (1905) and Der Untertan [The Patrioteer] (1918) helped the older brother of the future Nobel laureate Thomas Mann to receive a prominent position within the arts and cultural scene of the Weimar Republic. The failure of his unswerving efforts for political preservation of the fragile system of government prompted Mann to emigrate to France – a country that, thanks to his very good knowledge of French, he nevertheless perceived as more of an adopted home than a place of forced exile – just a few weeks after the Nazi assumption of power. As early as August 1933, he was one of the first prominent figures to have his German citizenship revoked by the Nazi regime.

Until 1940 Mann lived in Nice, where, through his extensive journalistic activities, he became an intellectual spokesman of the anti-Nazi emigration. In Paris in 1933/1934, he had already published the two polemical political pamphlets Der Haß [Hatred] and Der Sinn dieser Emigration [The meaning of this emigration], and he also wrote countless articles for exile magazines like Die Neue Weltbühne [The new world stage] and Die Sammlung [The collection], the latter published by his nephew Klaus Mann. He subsequently became the honorary chairman of the newly founded German writers’ association ‘Schutzverband Deutscher Schriftsteller’ and president of the German Freedom Library. And the committee to prepare a German popular front – the so-called Lutetia Circle – was set up in 1936 on his initiative. Following France’s military defeat, Mann fled in August 1940 – together with his wife Nelly and his nephew Golo Mann, as well as Franz Werfel and his wife Alma Mahler-Werfel – over the Pyrenees to Lisbon and sailed from there to the USA. He spent the last ten years of his life in Los Angeles in increasing isolation; the American continent remained foreign to him until the end.

Heinrich Mann died just a few weeks before his scheduled return to Berlin. The post as president of the Academy of Arts that had been offered to him by the newly founded GDR was assumed in his stead by Arnold Zweig.