[When I long for you, mostly I think of the sound of your voice, which I love like a force of nature, like an element. In this sound you are (for me) entirely contained, everything else is just a part of you, and when I wrap myself in your voice, you are completely with me. (ed. trans.)]

Lotte Lenya began her acting and dancing career under her birth name of Karoline Blamauer in Zurich. There she shared the stage with Elisabeth Bergner. In 1921 she went to Berlin, and the same year she took the pseudonym Lotte Lenya. In 1924 she met the composer Kurt Weill – an encounter that was to prove decisive for her professional and private life in the future. Weill recognised her great singing talent. As Lenya had not had a classical singing education, he wrote the roles to be tailored for her. The result was unusual, very personal parts that made Lotte Lenya famous and which are still associated with her voice even today. One well-known example of this is Pirate Jenny in the Threepenny Opera from 1928 – a piece that Weill created together with the writer Bertolt Brecht.

Aside from the professional success that Lenya had in the Weill-Brecht productions, she found in Weill a companion whom she accompanied – often in difficult circumstances – until his death in 1950. Her first marriage with Weill lasted from 1926 to 1933. In 1937 they married for a second time in their American exile. Lenya performed in New York night clubs, where she familiarised the crowds with Kurt Weill songs. At the première of Weill's oratorio The Eternal Road – Der Weg der Verheißung she played a leading role, and she helped the Threepenny Opera become a hit on Broadway. After Weill's death, Lenya dedicated herself to his artistic legacy. She herself had continued success as a film actress and singer of Weill's work. 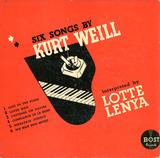