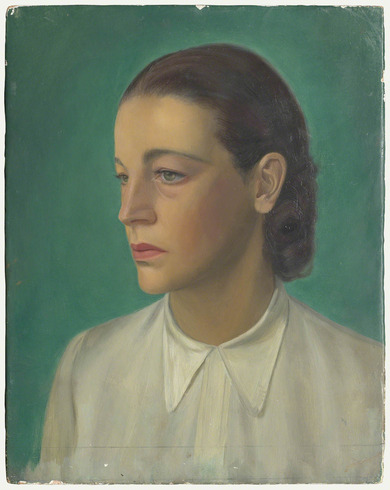 [Her talent is of a highly original and very intense nature. It excels in her caricatures, which demonstrate remarkable humour and exceptionally good technique. (ed. trans.)]

Erika and Klaus Mann in their book (published in 1939) about living in exile, Escape to Life

A cosmopolitan spirit, Eva Herrmann never really settled anywhere. She grew up in Munich as the third of five children, her father an American painter with German-Jewish roots and her mother a Romanian Jew. She often accompanied her father on trips to New York as an adolescent and continued travelling between the continents in adult life. Although she originally wanted to become known as a painter, her artistic work also included book covers and, above all, drawings and caricatures. Her breakthrough finally came in 1929 with the release of On parade, a collection of caricatures of American authors. It was during this time that she became acquainted with the Mann family, in particular Klaus Mann and Erika Mann, as well as their friend Ricki Hallgarten. From 1933, Eva Herrmann lived for the most part in the southern French town of Sanary-sur-Mer, where she maintained close contact to the circle of emigrants living there. Commissioned by the exile publishing house Querido in Amsterdam, she worked on cover designs for Lion Feuchtwanger’s novel Exil.

Herrmann moved to Hollywood in the forties where she lived as part of the local emigrant community. While her caricatures are characterized by clear lines and a certain austerity, she became increasingly interested in spiritual phenomena which her work dealt with in her later phases. In his 1960 retrospective Mein zwanzigstes Jahrhundert, philosopher and writer Ludwig Marcuse summed her up as someone who was very rational who believed in ghosts.